Coronavirus: It makes you wonder how bad things could get if everyone really fell out 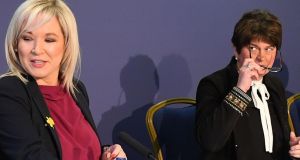 On what now seems like the long-ago date of January 30th, when the World Health Organisation declared coronavirus a global emergency, it issued an accompanying statement warning against the promotion of “stigma and discrimination”.

This caused some eye-rolling in the British press about equating hurt feelings with health. In reality, anyone whose historical knowledge extends before January knows new illnesses always produce scapegoats and dangerous divisions. Perhaps it was inevitable this would occur in a society as divided as Northern Ireland. But for it to happen so quickly over one relatively minor disagreement has been a disturbing failure of politics.

Rancour within the Stormont Executive and between North and South on coronavirus policy relates almost entirely to a two- or three-week gap on school closures.

The Republic announced its closures last Thursday. Northern Ireland anticipated closing its schools by Easter at the latest. Every day without action counts, and the North is two weeks behind the South in the epidemic.

Both parts of Ireland are at different stages because of their different societies and economies. There was never any need to make this a constitutional issue. Comparable differences occur at a regional level within countries, including the UK, where London is two weeks ahead of everywhere else.

North-South distinctions might break down in Ireland around the Border, along with the effectiveness of separate measures – a concern voiced this week by Tánaiste Simon Coveney. But this is an issue on most borders in Europe. Some countries are responding by closing their frontiers. Others, such as Belgium and Holland, are having their own arguments over synchronising closures. There is nothing special about being an island. There is still a need for Dublin and Belfast to co-ordinate policies, perhaps with unique advice for the Border region. Neither administration considered this a priority when making and communicating their plans.

Thanks to that oversight, fault lines were pre-stressed. Last Thursday, poignantly, Stormont began with a demonstration of what Northern Ireland politics could be like.

Every Minister in the five-party Executive held a joint press conference to explain their shared coronavirus policy, based on scientific advice they had received from the North’s chief medical officer.

There had been differences of opinion among the parties on accepting school closure advice. However, all put on a reassuring display of collective responsibility for the public.

Although other countries in Europe were practising the same policy at various stages, Irish exceptionalism saw only a difference between the UK and Ireland, while Anglophobia interpreted this as a callous experiment.

The Ulster Unionist Party, which holds the health portfolio, responded to Sinn Féin’s U-turn by accusing it of wanting an all-Ireland policy for purely political reasons. Rising tensions bounced the SDLP into demanding immediate school closures the next day.

Nationalists now turned on unionists, accusing them of backing a British policy for purely political reasons. Republicans focused their most bitter criticism on Alliance for sticking with the Executive’s scientific advice, thereby giving unionists cover. Once an argument becomes sectarianised in Northern Ireland, no objective stance is allowed.

From the Republic, attacks on unionists went beyond the usual social media static to include journalists, commentators and political representatives, many of whom appear uncertain where political criticism ends and an ethnic slur begins.

Anger cranked up another gear on Monday when the UK government had to change its policy following updated scientific advice. Yet even the new advice is ambivalent on school closures and relates to a 12- to 18-month period, rather than the next few weeks.

The degree of vitriol and paranoia this has unleashed is all the more remarkable when it is realised schools closure policy remains Stormont’s only substantive point of disagreement. The policy has always been under daily review and the window for closure is universally accepted to be shortening by the day. Unionists have never disputed the need for all-Ireland co-ordination and the DUP and Sinn Féin were all smiles on Saturday at the North-South Ministerial Council, where Taoiseach Leo Varadkar said the only difference between North and South was “timing”. On Monday, the Executive issued a further statement on Stormont’s coronavirus response, with school closures still the only point of dissent.

It raises the ominous question of how bad things would get if everyone really fell out.

Northern Ireland is closing its schools this evening, at an earlier point in the epidemic than the Republic. It will be a chance to defuse tensions and consider how to prevent such an argument occurring so easily again. Better communication between parties, governments and the public looks like an essential first step. Given what we are all facing, this merits as much attention as any Stormont deal.

1 Anti-alcohol zeal of public health experts peppers reopening debate
2 Miriam Lord: Helen McEntee holds up well for someone with barely a leg to stand on
3 Covid-19: Government set to reject advice and approve reopening of gastropubs and restaurants
4 Admission of mistake in Oxford vaccine dose raises doubts over reliability
5 Restaurants and gastropubs to reopen in December under Government plan
Real news has value SUBSCRIBE