Grand National set to be richest Irish jumps race ever 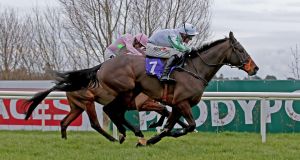 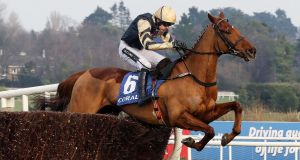 Track manager Peter Roe replied “100 per cent it is” when asked if the Easter Monday highlight shapes up as a better race than its Aintree counterpart. He attributed that to the massive increase in prize money.

The Irish National’s value has been almost doubled from last year’s €275,000 prize-fund, a major boost for a race which had been regarded as being under some pressure in terms of prestige in recent years.

“Look at Bless The Wings who was runner up last year. He’s number 59 to get into our race and he was first reserve for Aintree. I know we have a maximum of 30 runners and Aintree has 40 but this looks the best quality Irish National we’ve seen in a long while.

“That says a huge amount about the cash injection and typifies what it has meant in terms of people’s mindset.

“A horse like Shutthefrontdoor has deliberately missed Aintree to come here. Carlingford Lough missed Aintree and will probably come here. We’ve never had a Grade One winning novice from the same season running in the race but Our Duke avoided Cheltenham and is coming here,” Roe said.

The next forfeit stage for the Irish National is on Wednesday ahead of Friday’s final declarations by which time watering will have taken place at Fairyhouse.

The going is currently “good to yielding” and Roe says his job is to maintain that for the Easter festival which starts on Sunday.

“I would love to be racing today. It’s lovely jumping ground. We’re told there are little spits of rain coming on Wednesday, Friday and Sunday evening but we will probably throw a bit of water on the track on Thursday,” he said.

Our Duke is currently a general 8-1 favourite and his in-form trainer Jessica Harrington is keeping her fingers crossed that ground conditions don’t get too fast.

“The only thing that will stop us running is if the ground got too quick. But good or good to soft and he’ll run,” she said of her novice who has two of his three starts over fences. “Hopefully he will be able to get into a rhythm early on and avoid any carnage or traffic jams. I do think he has a good weight and he should stay.”

Harrington has yet to win an Irish National but Dermot Weld scored with Perris Valley all of 29 years ago and he plans to try and again trump the National Hunt game’s big guns with the 40-1 outsider, Three Kingdoms.

Fourth to Wrath Of Titans in the Kerry National last September, Three Kingdoms finished last over hurdles at Naas a month ago.

“Good ground would be a huge help to him. He’s working extremely well and if he gets the trip he’ll run a big race,” Weld said. “He was staying on well when the ground was too soft in the Kerry National. He’s an outsider but I’m optimistic.”

Easter Sunday’s highlight will be the Ryanair Gold Cup in which the JLT winner Yorkhill looks to dominate an 11 strong entry after the five-day stage. Sunday’s other top-flight contest will be the Irish Stallion Farms Mares Novice Final for which 14 remain in contention.

They include three cross-channel possibles, including the Fergal O’Brien trained Colin’s Sister who has been supplemented into the race. Donald McCain has left in Lastbutnotleast while Pearl Royale could run for Nigel Hawke.

A strong home team is likely to include the Willie Mullins pair, Let’s Dance and Airlie Beach who won the Royal Bond at the track last December.

Wednesday evening’s Dundalk sees half a dozen runners from Ballydoyle including both the Round Tower winner Intelligence Cross and War Secretary in the Listed Patton Stakes.

Both could wind up behind the double course and distance winner Ambassadorial who represents the in-form Michael Halford team.