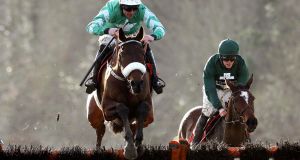 The Cheltenham Gold Cup favourite Presenting Percy’s eagerly-awaited return to action has been repeatedly delayed due to the going. Photograph: Lorraine O’Sullivan/Inpho

The absence of rain has become a real problem for Ireland’s racecourses with relatively quick ground conditions preventing some of racing’s top names from appearing this winter.

The Cheltenham Gold Cup favourite Presenting Percy is the most high-profile example of a horse whose eagerly-awaited return to action has been repeatedly delayed due to the going.

However the issue appears to go through the ranks and Fairyhouse’s manager Peter Roe revealed on Tuesday that weather conditions are affecting sizes of entries.

“This is a real problem. We’re on the easy side of good which is perfectly safe but I’ve only just over 100 entries for Saturday because it’s not suitable for soft ground horses. It’s a frustration for everyone, not just us,” he said.

Fairyhouse race on Saturday, and also on Tuesday, with Punchestown hosting back-to-back fixtures in between on Sunday and Monday. The ground at both tracks is officially good and good to yielding in places.

“I hate the word watering. I hate it with a vengeance, because it’s impossible to get it right at this time of the year. And I wouldn’t do it.

“But I saw Musselburgh put 5mls of water on the other day. That wouldn’t keep the dust down. But even so, to see a track starting to water in January is an awful thing.

“It’s global warming and we have to wake up to it. We’re dealing with a natural surface and the grass has never looked healthier. We’re actually cutting the track today, which is unheard of in the second week of January,” Roe added.

Punchestown spokesman Richie Galway is already keeping an eye on April’s National Hunt festival and the need for the weather to break before then.

“We’ve never seen this before. Our ground is marginally quicker than it was for Durkan day [in December].

“We’re conscious of our festival in April where we want the ground to ideally be on the slow side of good. And to provide that we need a relatively large volume of rain to fall. But there’s no indication of a change,” he said.

“It’s frustrating for everybody but I imagine Willie Mullins has a lot of horses he has been unable to run because of the way the ground has been.

“I would say a lot of trainers have good horses they planned to put out in the autumn and they haven’t been able to run them because the going hasn’t changed.

“It has been a very, very strange season. I can’t say there’s been a dramatic fall in the number of runners: it’s the quality and the type of runner,” Galway added.

A number of tracks have also felt the cost of being unable to provide schooling races on non-racedays this winter.

“I would normally have three or four schooling races during the winter and they’re a lucrative source of income for us. But I don’t think I’ll have any this winter. To school you need soft ground and that’s not going to happen.

“It’s the same in Thurles. Schooling races are very important to them and they haven’t been able to have any,” Peter Rowe added.

Sunday’s feature at Punchestown is the Grade Two Sky Bet Moscow Flyer Novice Hurdle which has been won in recent years by such Willie Mullins stars as Douvan and Vautour.

The champion trainer has only three of the 14 entries left in after Tuesday’s forfeit stage including the Tramore winner Harrie.

Moscow Flyer’s trainer Jessica Harrington has two options left in the race named after her former stable star, including Press Conference who upset the highly touted Annamix at Limerick over Christmas.

“Press Conference is in terrific form since Limerick and I would love to run him,” Harrington said. “I’m just waiting for some rain to arrive!”

Sunday’s other black type contest is the Grade Three Total Event Rental Novice Chase. Thirteen entries remain in it and they include the JP McManus owned Winter Escape who has won his last two starts over fences in impressive fashion.