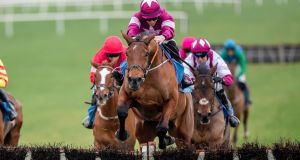 Gordon Elliott landed the first Grade One prize of 2019 when his unbeaten novice Battleoverdoyen emerged victorious at Naas on Sunday.

Having dominated the Lawlor’s Hotel Novice Hurdle between them for the previous five years, Elliott and Willie Mullins were expected to fight out the finish again in the first top-flight prize of the New Year. However the apparent first-string of Mullins’s three runners, Tornado Flyer, was pulled up by Ruby Walsh a mile from home.

Instead it was left to his stable companion Getareason to battle for the lead with Magnium on the turn in although once Jack Kennedy loomed on Battleoverdoyen both were fighting for minor money.

The 2-1 favourite had previously won a maiden, a bumper and a point to point and his inexperience did emerge early in the straight when briefly looking to struggle.

That greenness rather than weariness was behind that became clear after a flamboyant leap at the second last flight that took Battleoverdoyen to the lead.

A slower jump at the last proved no impediment and the winner had almost three lengths in hand of the 16-1 runner up Sams Profile.

“We’ll work back from Cheltenham and it will be either or (the Ballymore Novice Hurdle-Albert Bartlett Novice Hurdle.) When they’re fit and well you’ve got to kick on,” said Gigginstown Stud’s Eddie O’Leary.

Samcro landed the Ballymore for Gigginstown last year and bookmaker reaction was to go as low as 5-1 about Battleoverdoyen for the same race.

It was noticeable however, how keen Elliott was to stress how his latest star novice’s ultimate future likes over fences next season. “He’s a big chaser in the making. Jack said he’s only learning and when he got to the front he didn’t know what to do. He jumped his hurdles great apart from getting underneath the last. He’d probably prefer a little more ease. He’s a chaser and a horse for down the road,” the trainer said.

“I don’t see why he couldn’t go to Cheltenham. It will be hurdling this year and chasing straightaway next year. He’s only a baby, and we don’t want to kill him, but he’ll have all the entries including at the Dublin Racing Festival,” Elliott added.

Mullins was left puzzled by Tornado Flyer’s performance. “He never went. Maybe the ground was too good, I don’t know,” he said. The horse was reported post-normal. Mullins’s third runner, Come To Me was found to be coughing after managing only seventh.

With Mullins having already passed the €3 million prizemoney mark in Ireland this season, Elliott trails his rival by almost three quarter of a million euro. It means the chances of another epic battle for the trainers championship look slim.

However Battleoverdoyen is just one of a line of talented novices coming through for Elliott this season, alongside such as the dual-Grade One winner Delta Work and the talented bumper performers, Envoi Allen and Malone Road.

The latter’s form lines got a boost in the opening maiden hurdle as Valdieu made winning start over jumps in effortless style.

Malone Road smoothly beat Valdieu in a bumper and the latter’s trainer Noel Meade said: “We’ve always thought the world of him and every time he went to the races we thought he’d win and he got beat and I couldn’t believe it.

“Malone Road made him look very slow in the north which says a lot for Malone Road. However the last day he was in the north he didn’t come off the bridle and won in a hack cater.”

He added: “He’s a smart horse and what I like about him is he’s going forward – when he sees a hurdle all he wants to do is go and jump it and get to the far side of it. I hope he is a Grade One horse. He’s a beautiful mover, a gorgeous looking horse and he jumps extremely well.”

The 5-6 favourite for the opener, Barrington Court, faded from the turn in and finished last. The mare was subsequently found to be lame.

Her jockey Mark Walsh was also beaten on the odds-on Campeador who couldn’t land a blow on Articulum in the three-runner novice chase.

“I was very close to pulling him out as I thought the ground was too lively for him. I weighed him this morning and he’s 578 kilos,” said Articulum’s trainer Terence O’Brien. “Hopefully he’ll go to Leopardstown and take on Grade One company.”

Mark Walsh did emerge with a winner on the day however, and a 49th of the season, when carrying JP McManus’s colours to victory on Punches Cross in the handicap chase. The winner had a head to spare over Quamino with Arvico Bleu in third. “He missed the first couple, and the last, but it was a good competitive races and there wasn’t much in it,” said the winner’s trainer Joseph O’Brien.