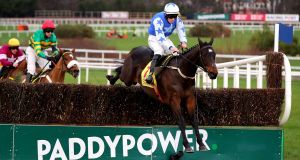 Willie Mullins remains keen to head straight to the Cheltenham Gold Cup with Kemboy following his impressive victory at Leopardstown.

The Supreme Horse Racing Club-owned seven-year-old faced a significant step up in class in the Grade One Savills Chase four days ago, but produced a dominant display to propel himself towards the head of the betting for the blue riband at Prestbury Park in March.

He is a best-priced 8-1 chance to provide the winning-most trainer in Cheltenham Festival history with an elusive first victory in the biggest race of the week — having saddled the runner-up six times.

Mullins is in favour of keeping his charge fresh rather than letting him return to Leopardstown for the Irish Gold Cup on February 3rd.

“He’s good, and I’m very pleased with how he came out of the race,” said Mullins.

“I’m very happy with the way he has improved all year, and I think he can maintain that improvement.

“I don’t think he needs another run. However, he’ll probably get an entry (for the Irish Gold Cup) — and we’ll see what way the race cuts up.

“I would rather just go straight to Cheltenham, I think.”

The Closutton maestro has a similar mindset regarding Sharjah after he added to his Galway Hurdle and Morgiana Hurdle victories in Saturday’s Ryanair Hurdle under the trainer’s son, Patrick.

As with Kemboy, he has the option of returning to Leopardstown in early February for the Irish Champion Hurdle, but Mullins already has one eye on the Champion Hurdle at Cheltenham in March.

He said: “He’s another horse that I think is benefiting from a gap between his races.

“As much as I’d love to go to Leopardstown with him — he’ll have an entry, and we’ll see how he is — I think I’d rather produce them in March fresh.”

Despite those two key victories, Mullins admitted his highlight of the festive period was seeing Faugheen eventually rise to his feet after suffering a heavy fall two flights from home in the Christmas Hurdle.

The 2015 Champion Hurdle hero was on the ground for some time before eventually being walked back by jockey Ruby Walsh, and Mullins does not believe the veteran has suffered any lasting damage.

He said: “He’s fine and he’s getting better every day. We’re happy with him every day — fingers crossed he stays all right.”