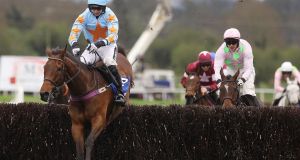 Un de Sceaux: has won the Clarence House Chase at Ascot for the past three years. Photograph: Lorraine O’Sullivan/Inpho

Connections of Un De Sceaux are praying for rain ahead of a rematch with Altior in the Matchbook Clarence House Chase at Ascot on Saturday week.

Willie Mullins’ nine-times Grade One winner turned 11 this week but showed he retains all his enthusiasm when pushing Altior in the Tingle Creek Chase.

The two are on course for a rematch in a race Un De Sceaux has won for the last three years and his owners believe very soft ground is their best chance of gaining revenge.

“The only concern we’d have at this stage is the lack of rain that is forecast. I’d love it to be an absolute mud bath in Swinley Bottom,” said part-owner Colm O’Connell.

“Looking at the forecast there’s not much rain for the next couple of weeks, it’s supposed to be cold and that just tightens up the ground.

“As it stands that’s his target, he’s going for four in a row and I’d love another crack at Altior. I think there’s something romantic about a rematch.”

He went on: “I’m not saying that we’ve any chance of beating him, but he’s entitled to take him along to the last fence. I know there was that downpour during the Tingle Creek, but it didn’t get into the ground.

“I walked Sandown before racing. I always take a spare pair of socks to change into, but when I went to change them they were bone dry, so the ground wasn’t that soft.

“I just think if we get proper heavy where they are thinking of abandoning the meeting, that’s when we’re at our best. Un De Sceaux with Ruby [Walsh] on board takes some beating in those conditions. I’d be happy to take on Altior if it’s like that – he’s like Ivan Drago and we’re like Rocky, we’ll keep coming back for more!”

Elsewhere, Next Destination has been ruled out for the remainder of the season due to a setback. A dual Grade One-winning novice hurdler last term, he finished third behind Samcro at the Cheltenham Festival.

Having gone on to win at Punchestown, hopes were high he could make his mark in the staying novice chaser division this campaign and he was around a 10-1 shot for the RSA at the Festival, but Willie Mullins has been forced to pull stumps.

“Next Destination has had a setback. It’s not serious but we’ve decided to treat it and leave him alone for the rest of this season. He’ll go novice chasing next season,” said Mullins.

Meanwhile, Nicky Henderson has revealed Might Bite will not run again until the Cheltenham Gold Cup – and will have his palate cauterised in the meantime.

Last season’s King George winner and Gold Cup runner-up has disappointed twice in this campaign, in the Betfair Chase and then in defence of his Kempton crown on St Stephen’s Day.

Henderson carried out numerous tests – and while the 10-year-old has not been making a noise, another breathing procedure has been decided upon.

Henderson said: “I was pretty sure his performance at Haydock could be put down to other things – but it appears that possibly it all comes down to the same thing, so after many, many discussions with all the relevant professionals, we have decided to cauterise his palate.”