Greenhouse, Aimsir and Cliff House teams ‘just wanted to help out where we can’ 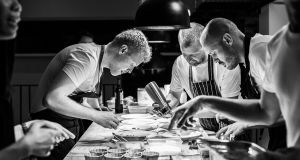 Chefs from Michelin-starred restaurants in Dublin, Kildare and Waterford are cooking meals for front-line workers dealing with the coronavirus crisis and for cocooning seniors unable to leave their homes.

Aimsir, near Celbridge in Co Kildare, which has two Michelin stars, sent portions of vegetable curry and side salads, with ingredients picked from its kitchen garden, to staff at Naas General Hospital over the weekend. “We have all these vegetables coming through at the property, and we don’t want any of it to go to waste,” says Aimsir’s head chef, Jordan Bailey. “We did just over 100 meals. We don’t even do that in a week normally.” And how was the food? “It was really tasty. Me and my sous chef took some home for dinner.”

The kitchen at the Michelin one-star House restaurant, at the Cliff House in Ardmore, in Co Waterford, is doing weekly meal drops to local elderly people in conjunction with the Society of St Vincent de Paul. In Dublin its sister property Cliff Townhouse fed more than 100 staff at Clontarf Hospital through the Feed the Heroes charity.

Our thought was for somebody who puts in a 15-hour day, they can go into the fridge, grab a meal, bring it home if they want to, and they won’t have to be cooking. It just takes the pressure off people

There is more to come from the country’s top chefs. From this day next week – Tuesday, April 14th – a trio from the Greenhouse, the Michelin two-star restaurant in Dublin, led by head chef and Kildare resident Mickael Viljanen, will run a production kitchen in Kilcullen, Co Kildare, sending out between 200 and 400 meals a day to front-line workers.

The moves come as many of the country’s chefs begin their third week without jobs to go to during the Covid-19 shutdown. “We were sitting at home feeling a little bit helpless with everything that’s going on and just wanted to help out where we can and bring a bit of happiness through food,” Jordan Bailey says. On Tuesday he was back in the kitchen at Aimsir, along with his wife, Majken, who is the restaurant manager, and his sous chef, James Bevan.

“Today we are making fish pie. Niall [Sabongi] from Sustainable Seafood Ireland has donated about 30kg of fish, Maria [Flynn] from Ballymakenny Farm was here this morning with potatoes and Seán [Hussey], from Hussey fruit and veg, dropped off loads of leeks, carrots, milk. I think we are going to make more than 100 meals today. We are trying it ramp it up a bit, so we might be able to split it between two different groups.”

The Greenhouse chefs’ project, which will launch on April 14th, will see Mickael Viljanen, Mark Moriarty and Paddy Lee working in the kitchen at Fallons of Kilcullen, cooking at least 200 meals a day to be distributed to front-line workers. “We were getting a bit bored. We’re closed since March 14th, and I’d say we have a couple of months ahead of us still,” Viljanen says.

The group have launched a GoFundMe page to finance the not-for-profit project, which raised €3,000 of its €50,000 target within 24 hours. “By doing it this way we can keep it going as long as we can, as long as it’s needed,” Viljanen says. Any surplus funds when the project is wound down will be used to finance a chef training scholarship.

The chefs will source produce at cost, or heavily discounted rates, from the restaurant’s suppliers, including Naas-based Redmond Fine Foods, and plan to cook on Mondays, Wednesdays and Fridays, with the meals being distributed on Tuesdays, Thursdays and Saturdays.

“We are working with community officers and gardaí from Naas, and they will be organising the logistics and will distribute it for us. We won’t be in contact with anybody else, which keeps us safe too.

“Our thought was for somebody who puts in a 15-hour day, they can go into the fridge, grab a meal, bring it home if they want to, and they won’t have to be cooking. It just takes the pressure off people.”

And what sort of meals will the two-star chef be cooking? “We are going to keep it very simple, approachable food. It’s going to be normal dinners: tasty, healthy food.”