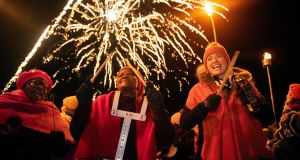 Members of An Spiddal community cast of fire bearers putting the final preparations in place for their fire lighting ceremony at the scenic pier on Monday February 3rd. Photograph: Andrew Downes.

Following the enforced suspension of Galway 2020 events due to Covid-19, the European Capital of Culture board has announced it is laying off all but a skeleton staff, and also ending its contract with artistic director partner Artichoke.

The board said it hopes this will result in “a viable, vibrant but undoubtedly contracted programme of events” later in the year.

The board statement said because the implications of the necessary restrictions on gatherings, social distancing and national and international travel, “Galway 2020 must consider the future of our programme”. Over the past few weeks it has consulted stakeholders - the European Commission, the Department of Culture, Heritage and the Gaeltacht, Galway City Council, Galway County Council, sponsors and all the cultural partners it has been working with, “and with whom we intended to work with over the course of this year” - to decide about the future of its year-long programme, which began on February 8th.

The three-week temporary lay-off of almost all staff is immediate, from Tuesday April 7th. ut of a core team of 30 in Galway 2020, 19 employees are being temporarily laid off. The board said it had also made “the very difficult decision” to end its contract with creative director Artichoke . The board said it was “very disappointed to have had to make these decisions”, and that the “decisions we take now are the only course of action we can responsibly take in the current circumstances”.

In January 2019, following 18 months of controversy, funding problems and a number of high-profile departures , the Galway 2020 board appointed UK arts management company Artichoke to act as creative director, a role vacant for almost eight months.

The finale of the opening weekend of Galway 2020, a fire spectacle in Galway city on February 8th, was cancelled because of Storm Ciara. Later, following restrictions because of the coronavirus, the public light spectacle on a Connemara mountain - Savage Beauty, over the St Patrick’s Weekend - was cancelled, and a number of other events were called off, halted mid-way or postponed.

In announcing the layoffs and a contracted programme later this year, Galway 2020 acknowledged and thanked its staff, particularly creative director Helen Marriage and the Artichoke team, for their hard work and commitment.

“Helen, working with the Galway 2020 team, had curated an extraordinary cultural programme of events, which would have provided many amazing cultural moments and experiences for local people across Galway city and county”.

The Galway 2020 board would continue to consult stakeholders to make “longer-term decisions in light of funding and timing constraints” and will make a further public statement after that, said chairman Arthur Lappin.

Speaking for the board, he said:

“We are mindful of the mission which has underpinned Galway2020 from its inception - to mount a programme that will celebrate the creativity for which Galway is renowned, to engage with communities throughout the city and the county in facilitating a strong and lasting cultural practice, and to lay the foundations for a sustainable legacy for cultural workers and communities long into the future.

“Circumstances arising from the Coronavirus emergency pose us significant new challenges, financial and temporal, which will inevitably give rise to undesired and painful alterations to our plans. We will exercise our responsibilities in a conscientious and effective manner within the resources and constraints imposed on us.”

Domhnall Gleeson, locked down in Dublin: ‘Oh s**t, this is embarrassing’
10