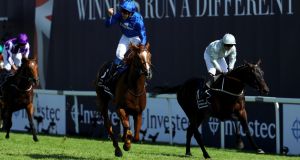 Masar, the first horse to carry Godolphin’s royal blue colours to victory in the Derby when he won at Epsom this month, looks set to miss the Irish Derby at The Curragh on June 30th.

He will drop back to 10 furlongs and compete against older horses for the first time in his next start following the decision to run him in the Coral Eclipse Stakes at Sandown Park on July 7th.

“His Highness Sheikh Mohammed [Godolphin’s founder] and I discussed Masar’s programme at length and have reached the conclusion that the Eclipse will suit him best,” said his trainer, Charlie Appleby on Wednesday.

“We will leave him in the Irish Derby, just to keep all options open. But the intention is to run in the Eclipse. Masar has won at Sandown [last year’s Solario Stakes], showing that he acts well on the track, and dropping back in trip will be no problem. He won the [one-mile] Craven Stakes [at Newmarket in April] and finished third in the 2,000 Guineas [so] he’s got plenty of speed.”

The decision to steer Masar around the Irish Derby at The Curragh on June 30th means that Saxon Warrior, the beaten odds-on favourite at Epsom, is now a strong odds-on chance to give Aidan O’Brien his 13th victory in Ireland’s premier Classic in 22 years.

It is also increasingly likely that Dee Ex Bee, the runner-up in the Derby, will head to The Curragh this month.

“If Masar is going to the Eclipse that would make Ireland a strong favourite for Dee Ex Bee,” said Charlie Johnston, assistant to his father Mark.

“He is in great order and we could even have gone to Royal Ascot as he has has come out of [the Derby] so well.”

Derby winners have a mixed record in the Eclipse over the past quarter of a century, with Erhaab, Benny The Dip, Motivator and Authorized all going down to defeat in their first race after winning at Epsom.

However, Sea The Stars and Golden Horn have redressed the balance in recent years, completing the Derby-Eclipse double in 2009 and 2015 respectively, and the news that Masar will head to Sandown Park next month saw him move to the head of the betting at a top price of 2-1.

Ascot racecourse confirmed on Wednesday that new measures introduced to tackle excessive drinking and drug-taking at next week’s Royal meeting will apply to all racegoers, including those in the Royal enclosure.

A team of at least 20 sniffer dogs will be used to check racegoers for drugs following a successful trial at a race meeting at the course in May, and will be deployed in the bars and toilets as well as at the entrance. The track also plans to breath-test racegoers as they arrive if they appear to be under the influence of alcohol.

1 Leo Cullen: ‘It feels like it all came crashing down on top of us’
2 Dave Hannigan: How Christy Ring arose the curiosity of American media
3 Oisin Murphy denies taking cocaine after failed drugs test in France
4 Gordon D’Arcy: If South Africa moves up north, it could all go south
5 Racing 92 players test positive for Covid-19 two weeks before Champions Cup final
Real news has value SUBSCRIBE