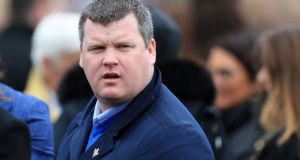 Having hit a century of winners in Ireland this season over the weekend, Gordon Elliott’s sights will turn to the first bumper Grade One programme of the winter campaign next Sunday.

The “Winter Festival” at Fairyhouse contains a trio of Grade One prizes that Elliott memorably swept the board in three years ago.

The unbeaten Envoi Allen is set to lead his team this time when perhaps the most exciting jumping talent in the country makes his eagerly-anticipated second start over fences in the Bar One Drinmore Novice Chase.

Envoi Allen is currently one of 18 entries in the race his trainer has won a record five times already, including with his subsequent Gold Cup hero Don Cossack in 2013.

Ballyadam is one of Elliott’s contenders for the Royal Bond Novice Hurdle while Fury Road and Sire Du Berlais could tackle the defending champion Honeysuckle in the Hatton’s Grace Hurdle.

The likely make-up of those races will become more clear at Tuesday’s declaration stage. What is already clear though is the continuing good form Elliott’s hugely powerful string is in.

The Co Meath trainer hit 100 winners for a sixth season in a row at Naas on Saturday with Lyreen Wonder’s victory in the Grade Two Fishery Lane Hurdle.

That momentum continued on Sunday and maintained Elliott’s lead over Willie Mullins for the trainer’s championship.

He remains an 11-8 shot to finally wrest the title away from his great rival this season.

Sunday’s most valuable race won’t be any of the Grade Ones but instead the Porterstown Handicap Chase. It has had its prize-fund boosted to €125,000 to compensate for the loss of this year’s Irish Grand National.

Elliott has 11 of the 38 possible runners still in the marathon contest, including the top four in the weights.

Sunday’s other unbeaten star will be Honeysuckle who will bid to make it nine in a row for trainer Henry De Bromhead in the Hatton’s Grace.

The Co Waterford trainer has passed the half-century mark for winners in Ireland this season but has cross-channel Christmas plans for two of his star chasers, Monalee and Put The Kettle On.

The latter won at Cheltenham last weekend and could travel to Kempton next month for the Desert Orchid Chase.

That takes place the day after the King George VI Chase which remains the plan for Monalee despite finishing only third on his return to action behind Presenting Percy at Thurles last week.

“His first runs back are sometimes disappointing but hopefully he will step up from it, which I think he will,” De Bromhead reported. “We are still looking at running him in the King George.”