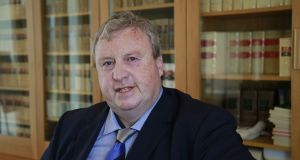 Irish racing’s top official has defended the pace of change in the sport’s anti-doping regulations.

Final agreement on a protocol that allows Irish Horseracing Regulatory Board (IHRB) officials test on unlicensed premises such as stud farms – and test a thoroughbred throughout its lifetime – has still to be reached.

That is despite an ‘industry-wide policy on prohibited substances and doping control’ having been unanimously approved the board of Horse Racing Ireland (HRI) in 2018.

During the summer long-awaited agreement with the Department of Agriculture on a mechanism to allow IHRB officials inspect unlicensed premises was reached.

However talks between the regulator and the Irish Thoroughbred Breeders Association (ITBA) on a formal protocol are still continuing.

After the industry policy was approved, on the back of an Anti-Doping Task Force report in 2016, HRI’s chief executive Brian Kavanagh said the policy could be in place to register the 2019 foal crop. But two years later nothing has been finalised.

“The IHRB and the breeders are engaging on it and we are keen to see that up and running as quickly as possible,” Kavanagh said on Friday.

“The legal basis that the IHRB can test on breeders’ premises has taken longer than we would have expected. But I would much prefer to get that right than get it done quickly.

“You’ve got to look at drug testing in the round. The various recommendations of the Task Force [included] a new role of head of anti-doping, the changing of the lab, and the allocation of extra resources.

“The Task Force was set up to look at changes in the area and many of their recommendations have been implemented.

“You would like to see some implemented quicker than they have been. But there are legitimate reasons for that, particularly in relation to stud farms.”

The doping issue came to the fore again this month when top trainer Jim Bolger claimed drug cheating is racing’s number one problem and questioned there is a “level playing field”.

“Mr Bolger was quoted in the press and I understand the IHRB have followed up with him. They have the responsibility for drug testing so I’m not going to step into that area,” Kavanagh said

“But if there is information in his possession then he obviously should and would share. Then it’s a matter for the IHRB to investigate.”

1 Andy Farrell hands Billy Burns first Ireland start against Georgia
2 ‘God is dead’: The world’s front pages remember Diego Maradona
3 Leinster’s weekend trip to play Scarlets cancelled
4 All bets are on as America opens the gambling sluice gates and the dollars flow
5 Keith Duggan: Through the glories and the disgraces, we were all Maradona addicts
Real news has value SUBSCRIBE