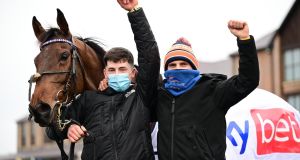 Dreal Deal continued his meteoric rise through the ranks with a Grade 2 success at Punchestown on Sunday where his starting price once again came under focus.

Unlike when pulling off a memorable gamble at Navan in September, after being backed from 20-1 into 6-4 favourite, Dreal Deal drifted alarmingly out to 22-1 for Sunday’s Sky Bet Moscow Flyer Hurdle.

However, despite winding up the complete outsider, the Ronan McNally-owned and trained star swept through from last to first, to win his sixth successive race and book a ticket to Cheltenham.

McNally, a Co Armagh based businessman who trains a handful of horses, put the lack of market confidence in Dreal Deal down to a number of factors.

“His preparation wasn’t ideal and that’s maybe why the horse drifted. We did fancy him but my horses weren’t 100 per cent over Christmas and had a week off.

“We also had frost at home and missed valuable work and took him to the beach on Sunday but it was half-frozen so he hasn’t really galloped.

“He hasn’t been eating as well as he can either, and his coat hasn’t been great. Denis (O’Regan - jockey) also thought he needed the run,” he reported.

It puts into more impressive context a display that saw bookmakers slash Dreal Deal’s odds for the Supreme at Cheltenham to 16-1.

Star names such as Douvan and Vautour previously took in the Moscow Flyer on-route to Supreme glory.

“He will probably go for the Supreme but will be entered for the Ballymore as well. That was the dream but he had to go and do that today. He’s done it now so we can dream!” McNally said.

It was O’Regan’s first time to ride Dreal Deal and he reported: “His handicapping experience stood to him and he kept jumping so well that I was able to hold on to them.

“He can travel real well but it takes him a while to get going and thankfully he got going in the straight. He’d a good jump at the last and won alright in the end.

“He’s definitely entitled to step up into higher company again.”

Action resumes at Punchestown on Monday although it won’t feature champion jockey Paul Townend who aggravated an old shoulder injury over the weekend.

“Paul was sore after his fall yesterday and I said to him this morning that I’d prefer he’d rest rather than come here today,” Willie Mullins said on Sunday.

“There are important races coming up and I’m hoping he’ll be back next weekend,” he added.

Top amateur Jamie Codd has two rides and looks a significant booking in particular for Mahler Allstar in a three-miler maiden hurdle.

The Jonathan Sweeney-trained runner was third to Stattler in his first start over flights during Christmas and shaped like a step up to three miles should be no problem.

Fans of the Triumph Hurdle hope French Aseel will hope for a form boost from the horse he beat at Leopardstown over Christmas, Dermot Weld’s Coltor, in the opener.

Leinster and Munster homing in on French opposition in Champions Cup draw 18:11
New Champions League format could see 36 teams in group stages 16:46
Sam Bennett has to settle for fifth in second stage of Paris-Nice 16:40
Ireland to play Qatar in Hungary on March 30th 13:46
Jacob Stockdale back in Ireland squad ahead of Scotland clash 10:50