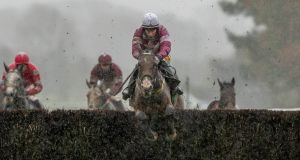 Noel Meade’s eight-year-old, carrying the colours of Gigginstown House Stud, put behind him a disappointing effort on this course five weeks ago to lift the valuable prize.

Sean Flanagan kept Daly Tiger off the pace set by the trio of Goulane Chosen, the 7-4 favourite Chatham Street Lad and Game Of War in the early stages.

He made stealthy progress as the pack closed in when Chatham Street Lad, impressive winner of Cheltenham’s Caspian Caviar Gold Cup, took the lead four out with a fine leap.

However, Daly Tiger soon joined and hit the front two out. Pont Aven made a late bid, but Daly Tiger stuck to his task well to win by five lengths. Chatham Street Lad was seven lengths away in third place.

“We put a claimer on him the last day. It probably wasn’t the claimer’s fault because he got his instructions to ride closer to the pace and I think we used him up a little bit too much,” said Meade.

“Today when Sean got him relaxed, he was just a different kettle of fish. He’s a brilliant jumper and he’s a nice horse.

“He’s going to get a fair old penalty for today so it might knock him out of handicaps.

“We’ll enter him in the Grand Annual (at Cheltenham), but I would imagine he’s going to have a lot of weight in that. I would think we’d probably look at Grade Threes. We’ll have a look where we go.

“I thought he’d go for a two-mile-five handicap in Leopardstown at the (Dublin) Festival meeting, but I’d say that’s a 150 race and I don’t think he’d get into that now.”

Teahupoo came out on top in a dramatic ITM Virtual Stallion Trial Hurdle at Fairyhouse.

The Willie Mullins-trained Youmdor looked a big threat when he loomed alongside Teahupoo (4-1) at the final flight, only for the 4-9 favourite to come down.

That left Gordon Elliott’s runner to win as he liked by 15 lengths in the hands of Robbie Power and make a winning debut for the County Meath handler. Teahupoo had won his only start for French trainer Gabriel Leenders at Auteuil in October.

Druid’s Altar was second with Autumn Evening half a length away in third.

“He’s a nice horse. Obviously we had a lot of luck on our side there with Willie’s horse going at the last,” said Elliott.

“I said to Robert ‘you were definitely beat’, but he said ‘I’m not so sure because my horse galloped from the last to the line’.

“He said he could see about three strides away from the last that (Paul) Townend’s horse was just starting to be squeezed along. I thought Willie’s horse would have won and we had luck on our side.

“He’s probably more of a stayer next year than a two-miler. I loved the way he put his head out and galloped from the last to the line.”

Teahuphoo was cut to 14-1 from 25-1 for the JCB Triumph Hurdle with Betfair, who left Youmdor unchanged at 14s.

3 Function of pleadings is to define issues between parties, not to go into evidence