Dreal Deal a non-runner as Fairyhouse is given green light 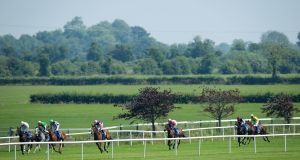 Tuesday’s racing at Fairyhouse will go ahead. Photograph: Tommy Dickson/Inpho

Ireland’s first National Hunt action in over a week goes ahead at Fairyhouse on Tuesday.

An inspection on Monday afternoon found that freezing conditions had relented in time for the programme originally scheduled on Saturday to get a green light.

The delay had originally resulted in Dreal Deal being added to a five-runner conditions hurdle. However, hopes of a rare six-timer for the Ronan McNally-trained horse on Tuesday have been scotched by a late stone bruise.

“It’s nothing major, it’s just a stone bruise. When we rode him out this morning he just wasn’t 100 per cent and you don’t want to take a chance with a horse like him,” McNally reported.

The Co Armagh trainer hasn’t ruled an appearance for Dreal Deal in this Sunday’s Grade 2 Moscow Flyer Hurdle at Punchestown instead.

“He’s still in the Grade 2 novice at Punchestown at the weekend and if he comes right in the next couple of days he could still go for that.

“Tomorrow’s (Tuesday’s) race was going to be a stepping stone to one of the Grade 1s at the Dublin Racing Festival next month, either the two mile or the two mile-six, whichever Appreciate It doesn’t run in a we want to avoid him if we can.

“That’s still in our minds and if he doesn’t come right for Sunday he could go straight to Leopardstown,” McNally added.

Dreal Deal’s winning streak opened in memorable style at Navan in September when he bolted up in a handicap hurdle after being backed into 6-4 favourite from 20-1 overnight.

The Irish Horseracing Regulatory Board subsequently launched an investigation into an apparent improvement of form which the jumps handicapper estimated in excess of two stone.

The same step was taken when Dreal Deal appeared on the flat the following month and won easily at Limerick as a 5-6 favourite.

Afterwards, the flat handicapper said the performance represented an apparent improvement in form in the region of two stone on his previous run on the flat.

Asked for comment on the progress of those investigations, an IHRB spokesperson said on Monday: “The investigation around that referral is ongoing. Some elements of the process have been delayed due to the current pandemic but the process is continuing.”

Dreal Deal scored again on the flat before two more victories over flights which has seen his official National Hunt rating climb spectacularly rise to 141. The first of his five wins came off a mark of just 84.

McNally has pointed to his string’s bounce back from a bout of aspergillus last season as reason for his successful run this campaign.

The one to note, however, could be Sizing Pottsie who will have just a fourth start over flights.

Jessica Harrington’s runner is rated 157 over fences following a smooth course victory last time and is in some betting lists for this Saturday’s Dan Moore Chase back at Fairyhouse.

Some of his hurdles form from over a year ago looks solid and the decision to put Sizing Pottsie back over the smaller obstacles can pay off.

With conditions already heavy, and significant rain forecast, there will be a premium on stamina at Fairyhouse.

That should be no problem to the veteran Stoughan Cross who is sent out by in-form local trainer Tom Gibney.

A total of eight runners have been declared for the re-fixed Lawlor’s of Naas Novice Hurdle on Wednesday.

The first Grade 1 of 2021 in Ireland is the highlight of a programme frozen off at Naas over the weekend.

They include the Henry De Bromhead-trained Bob Olinger who won his maiden so impressively at Navan last month.

Gordon Elliott has won the two-and-a-half mile contest three times in the last four years and will be doubly represented by Ragnar Lodbrok and Wide Receiver.

Willie Mullins, a winner in 2018 with next Destination, relies on Blue Lord this time.

In other news, it has been confirmed that Chanelle Pharma will sponsor the Irish Champion Hurdle at next month’s Dublin Racing Festival.

The company based in Co Galway will back the day one festival highlight for the next four years. It will also back a Grade 1 novice hurdle on the second leg of the Leopardstown event.

Last year’s winner, the unbeaten mare Honeysuckle, is expected to defend her Irish Champion Hurdle crown for trainer Henry De Bromhead. He has also won the race with Petit Mouchoir (2017) and Sizing Europe (2008).

5 French camp scrambling hard to explain how the bubble burst