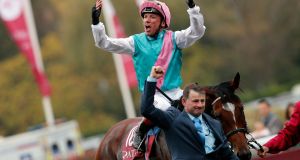 Enable begins her bid for a record third Arc success in Saturday’s Coral Eclipse at Sandown with Frankie Dettori on board. Photograph: Francois Mori/AP

Last weekend’s shock Irish Derby winner Padraig Beggy appears to be on pacemaker duty again in Saturday’s Coral Eclipse at Sandown although this time he’ll have Frankie Dettori keeping tabs on him.

The Italian superstar is on the odds-on Enable who makes a first start of a campaign that in October could see her become the first horse ever to win the Prix de l’Arc de Triomphe three times.

First though Enable has to become just the third of her sex ever to win the historic Eclipse. Only Pebbles (1985) and Kooyonga (1992) have ever managed the feat before.

However for once the distaff element to the eight-strong field look dominant with Enable’s old rival Magical her most obvious danger.

Aidan O’Brien is pursuing a potentially record-equalling sixth Eclipse although Magical will have to make it third time lucky in her rivalry with Enable.

Out of the money in last year’s Arc, Magical stepped up significantly at the Breeders Cup to run Enable to half a length in a race that also included Ballydoyle’s outsider Hunting Horn.

In the words of Enable’s trainer, John Gosden, Hunting Horn spent much of that race “attending” the winner before eventually fading out of the money.

However Hunting Horn has made the running before and over this ten furlong trip will be widely expected to do so again with Beggy on board for the first time.

The danger of giving Beggy too much rope at the front was vividly illustrated on Sovereign at the Curragh last Saturday with a stunning 33-1 upset.

This time however it is the potential tactical machinations of Dettori and Ryan Moore behind him that are likely to prove the most fascinating element.

Magical was beaten by Crystal Ocean at Royal Ascot a few weeks ago, form that leaves her with plenty to find on Enable. Much quicker going however will play to the strengths of the race-fit Irish filly.

“We were going to give her a break after Ascot but she came out of the race very well,” O’Brien said. “With the autumn in mind she’s going to have to have a break sometime and it’s very possible it could be after this.”

Later on Saturday night O’Brien’s top-flight focus switches to New York where he is doubly represented in both the $1 million Belmont Derby and the $750,000 Belmont Oaks.

Wayne Lordan teams up with the French Derby fourth Cape Of Good Hope in the colts race while Michael Hussey is on Blenheim Palace in a race due off at 10.44 Irish-time. O’Brien won it three years ago with Deauville.

Ireland’s champion trainer landed the Oaks a year ago with Athena and this time is represented by Just Wonderful (Lordan) and Coral Beach (Hussey.) The fillies race is off at 9.30.

The dispersal of Ballydoyle jockeys sees Donnacha O’Brien on domestic duty with 11 rides spread between Naas on Saturday and Limerick a day later.

The reigning champion jockey has ground to make up on his rival Colin Keane in the race for this year’s title and his weekend engagements are for both his father and his brother, Joseph, the top two figures on the trainer’s table.

Donnacha O’Brien is on Year Of The Tiger who is kept to seven furlongs for the opening maiden at Naas after his run in Royal Ascot’s Chesham Stakes.

He can keep the pressure up on Keane on Sunday when teaming up his brother’s trio of hopefuls, Fancy Footings, Latin Five and Myth Creation.

Europe’s other weekend Group One is the Prix Jean Prat at Deauville on Sunday, a race dropped in distance to seven furlongs, and which will see last year’s champion juvenile Too Darn Hot try to get off the mark for 2019.

1 John Egan the hero for Sheffield United against Wolves
2 After rejection by 13 publishers ‘The Lost Soul of Eamonn Magee’ is a winner
3 Dara O’Shea moves West Brom closer to a top flight return
4 Different Strokes: Frankie leaves Fleetwood for Hollywood
5 Rory McIlroy: ‘It sort of sucks going off in the middle of the pack on a Sunday’
Real news has value SUBSCRIBE