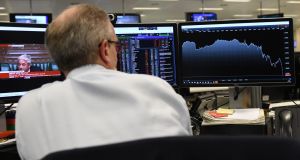 US stocks and bond yields plummeted on Tuesday as new evidence emerged about the coronavirus’s spread, and the US, Japan and Italy issued warnings on the impact of the outbreak.

Wall Street’s sell-off picked up steam in afternoon trading after a warning by the Centers for Disease Control and Prevention that the US must prepare for the “inevitable” spread of the coronavirus.

The S&P 500 was down 2.4 per cent, a day after it dropped 3.4 per cent in its biggest slide since trade tensions rattled markets in February 2018. Wall Street’s favourite fear gauge – the Vix volatility index – soared 19 per cent to 29.

Dublin followed other markets lower on rising concerns over Covid-19 with AIB and Bank of Ireland shares particularly weak, as both fell more than 4 per cent.

Widely followed trading strategies that call for investors to sell stocks when volatility jumps intensified the downturn, said Michael Mullaney, director of global markets research for Boston Partners. “They take the escalator up but they take the elevator down when ‘vol’ spikes ... It’s vicious cycle until the Vix goes down.”

As stocks dropped, investors flocked to haven investments. The yield on the benchmark 10-year US Treasury bond fell to a record low of 1.31 per cent, while gold rose 1 per cent.

European markets fell earlier, with the Stoxx Europe 600 index losing 1.8 per cent, bringing its declines this week to more than 5.5 per cent. Stocks in Italy, the European country hit hardest with 322 confirmed infections and 10 dead, closed down 1.4 per cent, extending losses this week to 6.5 per cent. London’s Ftse 100 fell to its lowest level since February 2019 as it slid 2.1 per cent.

The declines came amid concerns over the disruption caused by the coronavirus, which has infected more than 80,000 and resulted in over 2,700 deaths worldwide. The health crisis has led to restrictions on how companies operate amid a breakdown of global supply chains.

Alex Azar, US secretary of health and human services, said the US needed to build up its stockpile of protective gear for healthcare workers. “We cannot hermetically seal off the United States to a virus, and we need to be realistic about that,” he said.

Michael Arone, chief investment strategist at State Street Global Advisors, said investors increasingly believed the Federal Reserve would step in to shore up the US economy and fend off any negative impact on growth and earnings.

“Investors believe that [the coronavirus] has accelerated the Fed’s willingness to act,” he said. “History proves that central banks will often come in to help support markets at times of stress.”

The odds of a quarter-point reduction in the US central bank’s main policy rate at its June meeting have nearly doubled in the past month to 47 per cent, according to data compiled by the CME Group.

Japan had earlier urged companies to adopt remote working, stagger shifts and hold online meetings to reduce the spread of the illness. An expert government panel said there had been 146 infections confirmed in more than 16 different prefectures, excluding cases from an infected cruise ship and Japanese evacuees from China.

“We are at the crossroads,” Shigeru Omi, head of the Japan Community Health Care Organization, said at a press briefing. “Local transmission is already going on.”

Prime minister Shinzo Abe asked companies to adopt the new strategy after his cabinet on Tuesday approved an antivirus plan.

Italy warned that the EU should offer flexibility on its budget targets should the coronavirus outbreak in its industrialised northern regions have a prolonged impact on an economy already teetering on edge of a recession. The majority of cases were clustered in Lombardy and Veneto, regions that together make up a third of output for the euro zone’s third-largest economy and about half of its exports. – Copyright The Financial Times Limited 2020

1 Lockdown exit: How can Irish economy reopen without big health risks?
2 Property market has not felt full impact of Covid-19, warns Sherry FitzGerald
3 Finance ministers gather as fears grow even the future of the euro zone is at risk
4 Coronavirus: Property rental in the jaws of the epidemic
5 I want to change my will quickly in case I fall ill. Do I need a lawyer?
6 Government announces €1bn in supports for businesses
7 Q&A: Where do we stand on mortgage holidays and payment breaks?
8 Tesco says coronavirus costs could reach €1bn
9 Cold water poured on idea of ‘helicopter money’
10 Toast believed to have cut its Dublin staff by 50%
Real news has value SUBSCRIBE