Gordon Elliott has 28 entries for the Easter Monday highlight worth €500,000 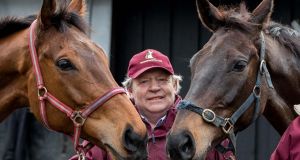 A bumper 24-strong entry from Britain remains in next month’s Boylesports Irish Grand National which unlike its Aintree counterpart doesn’t appear set to be embroiled in any Anglo-Irish ratings controversy.

The three Michael O’Leary-trained horses – Outlander, Empire Of Dirt and Don Poli – whose treatment by the British Horseracing Authority handicapper so enraged the Ryanair boss that he took them out of the Aintree National are among the topweights in a 124-strong entry overall.

On home ground, all three are rated according to the marks given by the Turf Club handicapper with Outlander top on 11.10 as O’Leary pursues a third win in a row in Ireland’s richest National Hunt race.

There are 32 Gigginstown horses entered and they include last year’s winner Rogue Angel as well as the 2015 hero, Thunder And Roses.

Unlike some of the controversial independent ratings the BHA put on Irish horses entered for the Aintree National, and also next week’s Cheltenham festival, the Irish handicapper has largely worked off the BHA mark assigned to the 24 cross-channel entries for Fairyhouse.

David Pipe has four of them while Paul Nicholls has two including the high-class Saphir De Rheu.

The traditional Easter Monday highlight has a boosted €500,000 prizefund this year and is also expected to have a major influence on the outcome of Gordon Elliott’s attempt to dethrone Willie Mullins as champion trainer.

Another Elliott possible, Ucello Conti, is among the 16-1 shots and is also prominent in betting lists for the Aintree National which this year will be run nine days prior to Fairyhouse.

As well as Rogue Angel, Mouse Morris has also left in his star novice Alpha Des Obeaux, one of the main fancies for next week’s RSA at Cheltenham. Alpha Des Obeaux has been given 10.7 in the handicap.

“It’s a lovely racing weight. The prizemoney is a big carrot and it comes over four weeks after Cheltenham so it’s a big enough gap,” said Morris.

“A lot will depend on what happens next week in the RSA. The Irish National has proved a good race in the past for novices and it’s been a lucky race for me. I won it as a jockey and twice as a trainer,” he added.

Morris is now in charge of Thunder And Roses, who won in 2015 for Sandra Hughes, as well as Rogue Angel who memorably kicked off a ‘National’ double for the Fethard trainer last year which was completed by Rule The World in Liverpool.

“Rogue Angel has been in good form since the Thyestes. He’s a spring horse and wants better ground. I’m planning to run him somewhere before one of the Nationals but he won’t run on Sunday [at Naas] as the ground will be too testing,” he said.