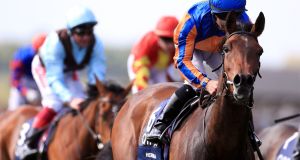 Hermosa ridden by jockey Wayne Lordan wins the Qipco 1000 Guineas during at Newmarket and will now bid for the Coronation Stakes. Photograph: Mike Egerton/PA

Aidan O’Brien’s dual-1,000 Guineas winner Hermosa didn’t get a chance to be a triple-classic star but instead has an opportunity to join an elite club of hat-trick heroines at Royal Ascot on Friday.

Attraction (2204) and the O’Brien-trained Winter two years ago are the only fillies to have landed the Guineas races at Newmarket and the Curragh and successfully proceeded to land Ascot’s Coronation Stakes.

Original plans to up Hermosa in trip for last Sunday’s French Oaks were shelved in favour of keeping her at a mile and O’Brien explained: “We were going to go to France but decided to stick to a mile as we think Ascot will suit her. She should be fine on the track.”

Ease in the ground won’t be a problem either for a filly that won her maiden on soft going at Galway while a stall ten of ten draw shouldn’t be much of an issue for a forward-going runner.

Hermosa has half a stone in hand on ratings of the French Guineas winner Castle Lady and over twice that on Jubiloso who bookmakers reckon to be her biggest danger.

The unbeaten Sir Michael Stoute runner could hardly present a more different profile form her battle-hardened and proven rival and will need to be near exceptional to overcome her inexperience in a contest like this.

Coolmore Stud’s commercial focus means O’Brien’s Group One focus is likely to be even more trained on Friday’s other feature, the Commonwealth Cup.

Ten Sovereigns started favourite for the 2,000 Guineas at Newmarket won by his stable companion Magna Grecia and patently failed to stay the mile.

Considering he looked to be on the wrong side of the track, and Ryan Moore was forced into racing more prominently than he’d have liked, Ten Sovereigns ultimately showed admirable grit to keep going into fifth.

It suggests Ascot’s stiff six furlongs may be ideal and adding this race to an unbeaten Group One-winning two year old season will make the son of No Nay Never a very valuable stallion prospect even if he does little else later this season.

Five Dynasties in 2004 is O’Brien’s sole winner of the King Edward VII Stakes but Japan could be a hotpot contender to bridge that 15 year gap.

Japan appeared to exceed some stable expectations in the Derby when third in a blanket finish to his stable companion Anthony Van Dyck. That represented major improvement from a Dante fourth off an interrupted preparation.

Banking on Derby form in the King Edward has traditionally been a dubious line to take but, with 20 days between the races this time, Japan could be one to actually step up from Epsom.

Following the demise of their Guineas runner-up Lady Kaya it would be a hugely popular win for Co Meath trainer Sheila Lavery and jockey Robbie Colgan were Lil Grey to land a hugely competitive Albany Stakes.

The draw doesn’t look to have been kind to Wesley Ward’s impressive dirt winner Nayibeth. Significantly, though, top US jockey Joel Rosario travels to maintain the partnership and might spoil any fairytale outcome.

It’s a dozen years since Ger Lyons’ sole Royal Ascot success but the recently purchased Johnny Drama could be a bet to bridge that gap in the Duke Of Edinburgh Handicap.

1 Tipping Point: DeChambeau’s transformation raises questions, but who will ask them?
2 Patrick Mahomes reported to have signed 10-year $400m deal with Chiefs
3 Matt Williams: Six Nations must recognise the desire for revolution outside Europe
4 World Athletics freezes out Russian athletes after $5m fine goes unpaid
5 Monica Seles: The warrior queen who could have been the best ever
Real news has value SUBSCRIBE