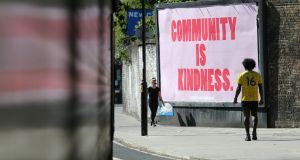 Premier League clubs returned to training yesterday, and ‘Project Restart’ was given a boost after only six positive coronavirus tests were returned out of 748 taken. Watford have announced they returned three of the positive tests - one player and two members of staff - while Burnley revealed assistant manager Ian Woan also tested positive. Under the league’s new rules, anyone who tests positive must isolate for seven days before taking another test. Meanwhile Manchester City’s appeal against their two-year ban from Europe for breaking FFP rules is to be heard by CAS in June, with a decision expected to be announced in July.

Elsewhere this morning John O’Sullivan has written about the spear tackle which ended Brian O’Driscoll’s 2005 Lions tour, as part of the Sporting Controversies series. Lions captain O’Driscoll dislocated his shoulder when illegally driven to the turf by Tana Umaga and Kevin Mealamu in the opening minutes of the opening Test match in Christchurch. The All Blacks duo escaped punishment on the pitch and immediately after - but the incident rankled for years. “The 2005 series against the Lions will always be punctuated with an asterisk; unfairly so in some respects because from a rugby perspective in those three Tests New Zealand eviscerated the opponents with a breathtaking brand of rugby.”

1 With Lincoln looking on, the crowd dropped to their knees as 7pm approached
2 In six months we will be in the grip of a 1980s-style recession
3 Luke ‘Ming’ Flanagan bares his bottom half to European Parliament
4 ‘Tralee felt friendlier than Killarney. We discovered a different welcome there’
5 Easing restrictions: What exactly will happen next Monday?
6 Michael McDowell: Black Americans fear the future and so should we
7 Coronavirus: 25% of new cases arising in the community with no known link to other cases
8 Róisín Ingle: My body has seized up while in lock down
9 Normal People: Full-frontal nudity was not its most radical feature
10 Are we there yet? The seven sticking points in Government formation talks
11 More than 200 people contracted Covid-19 while in hospital for other conditions
12 Church of England rules Irish inscription on grave stone must have translation
13 Dating Amber: A story about two gay teenagers, being each other's beards
14 Apple tax case: Four individual lawyers paid over €500,000 each
15 Aer Lingus wants quarantine period axed to resume flights in July
16 Google facing $5bn lawsuit for tracking in ‘private’ mode
17 Jacob Stockdale gives keyboard warriors the slip in textbook fashion
18 Miriam Lord: Not a bare ankle, hairy knee or a Ming the Trouserless to be seen at Covid committee
19 Programme for government must include 'fiscal responsibility' – Varadkar
20 National History Museum seeks experts to dismantle 100-year-old whale skeletons
21 Man gets protection order after partner ‘ran at him with a blade’
22 George Floyd: US protesters defy curfew as demonstrations over killing rage on
23 Coronavirus: Speed limits to be cut to 30km/h across Dublin City Council roads
24 Northern Assembly supports DUP motion on abortion
25 Do I want things to go back to normal? I’m not so sure I do
26 Should my mam wait for house prices to drop before buying?
27 Anne Harris: Fatherhood could be the big winner from lockdown
28 The subtle signs that point the way towards haemochromatosis
29 Michael Harding: How I learned to stop worrying and love my enemy
30 Inequality, not racism, has been institutionalised in the US
31 Dealer group trashes Government plans for petrol ban from 2030
32 What will reopened childcare centres look like to staff and to children?
33 Sally Rooney: It all started with love poems
34 Gardaí investigate Dublin Black Lives Matter protest over Covid-19 rule breach
35 How do I convince my wife that I’d be a great stay-at-home dad?
36 Nissan warns of threat to UK factory Brexit talks fail to agree trade deal
37 A third of arrivals in Ireland are not answering phone for self-isolation checks
38 Double Standards for Men No 253: Lynn Ruane v Paul Mescal
39 Coronavirus: Global deaths pass 380,000 as India still ‘very far from peak’
40 Covid-19: Easing of restrictions ‘unlikely’ to be speeded up
Real news has value SUBSCRIBE