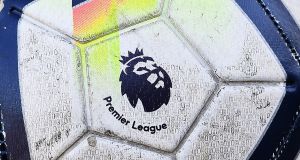 The Premier League has been buoyed in its attempts to complete the season, after only six of 748 players and staff tested positive for Covid-19.

A first round of results from 19 clubs provided welcome news for the league, which feels a gathering momentum to Project Restart. With the testing system in operation clubs started to return to training on Tuesday, albeit while observing physical distancing. The low rate of positive results will add heft to the league’s attempts to persuade players that theirs is a safe environment in which to return to work.

Burnley assistant manager, Ian Woan, has been named as one of the six to test positive. The other five have yet to be named. The individuals will be expected to isolate for seven days. The 20th club completed testing on Tuesday and their figures will be included in the results from a second round of testing, due to be published on Saturday.

Germany’s Bundesliga, which restarted last Saturday, announced 10 positive tests in early May from 1,724 tests on players and staff at clubs in the top two tiers, equating to 0.58 per cent of tests being positive to the Premier League’s 0.8 per cent. On May 10th, La Liga said five players in Spain’s top two divisions had tested positive, without naming how many had been tested.

Focus now turns back to the process of creating medical protocols, with the next task a plan for the safe introduction of contact training. This is likely to prove the most controversial part of Project Restart, with Watford’s Troy Deeney – who has said he will refuse to return to training over safety concerns – having articulated the fears of many players over risks to their health and that of their families.

The Newcastle left back Danny Rose has aired similar concerns to Deeney. Newcastle went back to training on Tuesday but Rose was wary to return. “People are suggesting we should go back to football, like we’re guinea pigs or lab rats,” he told the Lockdown Tactics podcast. “We’ve going to experiment this phase and see if it works or not.

“I can just imagine people at home saying: ‘Well, they earn that amount of money, so they should be going back.’ For stuff like that, I think: ‘Is it worth the hassle?’ I could be potentially risking my health for people’s entertainment, and that’s not something I want to be involved in if I’m honest.”

The Premier League hopes to complete a return to contact training in short order. It is to meet this week with representatives from the department for digital, culture, media and sport and public health officials to discuss the protocols needed to enable “stage two” of a return for elite sport, rules which will incorporate physical contact.

Once the government approves a rubric for guidelines, the league will consult with players, managers and the Professional Footballers’ Association before finalising bespoke rules. The league hopes to finish the protocol by the time the 20 shareholder clubs meet next Tuesday, when it would be put to a vote.

The timeline will not get any less frantic should that vote pass, with further considerations needed on how to make matches behind closed doors safe, issues which include resolving discussions with police about the use of home venues. There is an acceptance in the league and within government that the end of June is looking more likely for a possible return, with Friday 26th a new mooted date.

As the process of discussion and debate continues, players and staff – up to 40 a time from each club – will continue to be tested twice a week. In charge of operating the testing procedure is Prenetics, a Hong Kong company whose UK arm had previously specialised in DNA testing. Now, according to its chief executive, Avi Lasarow, it provide a “gold standard” in Covid-19 testing.

“It’s not just a test it’s an overall process,” said Lasarow, whose company has formed a consortium with the London-based laboratory TDL to process results. “Our role as a company is to provide a gold-standard solution by essentially delivering the ability to collect the samples safely with registered healthcare professionals, make sure those samples get to the lab for analysis under a strict chain of custody and then report that out via a secure technology infrastructure.”

Lasarow said their testing procedure had proven effective in Hong Kong and promised an overall accuracy of 98.8 per cent. He said Prenetics had had conversations with the UK government about providing testing for public health, but was not currently doing so. “I would like to confirm that there’s absolutely no possibility of the tests being provided in the private sector impinging on what the frontline workers and NHS staff are actually needing,” he said. – Guardian