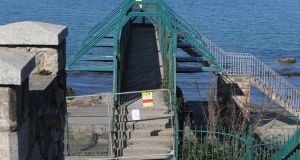 Seapoint beach and swimming area has been closed off to the public during the lockdown. Photograph: Nick Bradshaw

They caged off the Physical Therapy Spas and Wellness Centres at Sandycove and the 40-foot. Great big barriers tethered together with metal couplings strung around the tiny beach. That was weeks ago. There was a doleful shrug of “well sod them anyway” tempered by an understanding of the reasoning.

The workmen came back last weekend and sparked a minor frisson of local excitement from the handful of people who watched them hammer and wrench the metalwork. Initially they removed a steel bracket then replaced it with something new and more secure. A disheartening reminder of a marathon not a sprint.

It is sitting there now, an empty carcass of shoreline, the sand rippled from the receding tide and footprint free, the swimming area empty. The canny bathers moved no more than half a pitch distance around the coast and began dipping in at another easy entrance point.

They came with the recent good weather and established a new and different swimming beachhead. When the tide was out there was the meanest strip of sand to wade in. Plenty.

But the battle-hardened Covid-19 lads, just days behind, were ordered to follow. More barriers were slung up and linked together to close off the new area. A ring of steel. Belfast city centre 1973 without the body search.

Apart from a little guerrilla paddling, where the younger leapt the barriers and stayed in for less time than it took to climb the fencing, the bulk of swimmers were throwing themselves in off the stretch of rocks along the main road between Dun Laoghaire and Sandycove. Needs must.

The nearest other beach at Seapoint, only six miles from the back gate at Trinity College, is locked up too, which has had the effect of pushing walkers and cyclists onto the footpaths and roads parallel with the sea. Like Salthill is to Galway the stretch of coastline has some of the greatest natural assets the city has to offer.

Then when the sun is out the narrow road along the sea front begins a lockdown transformation. From a normally clogged commuter artery to and from the city it has become a mini sporting plaza. It runs for a few miles with runners, walkers, swimmers, cyclists, canoeists, surf boarders and skateboarders all actively taking advantage of the lack of cars and the weird expansion of time that has happened.

Right there Ireland has future and current Olympic stars and starlets in at least eight sports. Abhorring nature’s vacuum and the lack of formal sports, isn’t that Irish women’s hockey World Cup finalist Chloe Watkins running past and isn’t that boxing coach Pete Taylor heading to the water with a rolled up towel under his arm?

The maligned skateboarders flick up and along public monuments and pieces of street sculptures doing what they shouldn’t be doing. It’s is a rite of passage. But it’s one that has worked. Skateboarding was due to make its debut as an Olympic sport in Tokyo this summer. Dudes all of them.

It was to have featured two disciplines, park terrain and street with the International Olympic Committee (IOC), when and if the games take place next summer, hoping it will draw more millennial viewers.

Trying to catch a wave on east coast Ireland comes with its own crushing challenges, geographical and meteorological. But there have been a few out off Sandycove, zipping past the seals in Scottsmans Bay on a motorised board.

Surfing without a motor was one of five additional sports proposed by the Tokyo 2020 Organising Committee, again to bring more youthful and vibrant events and culture into the Olympic programme. Its inclusion was approved by the IOC in 2016.

The other new sports are karate, sports climbing and the return of baseball and softball. The IOC do love their blood sports, karate joining boxing, judo and taekwondo.

Walking, running and cycling have been part of the Olympic roster since the modern games began. The Triathlon combining all three, first appeared in the 2000 Olympics in Sydney. Canoeing has been in the schedule since the 1936 games in Berlin.

No sailors from the local clubs have yet caught the wind. But if you walk either pier in Dun Laoghaire in normal times you can actually wave to Rio silver medallist Annalise Murphy exiting into the bay. She’ll probably wave back.

The assembly of various shapes and ages doing their different things gives lie to any notion that sport has closed down. Mass gathering professional sport, major amateur sport and team sport have gone away for now and there is a particular void at the industrial end.

But people haven’t walked out on sport. On their 5k leash, they have modified behaviour, many substituting doing it for watching it.

There has been a purposeful shift with no school and little work fuelling an upsurge of rediscovering basic drivers of sport, movement and enjoyment. And the swimmers, now a transitory bunch seeking a safe launch pad, are always somewhere making themselves active.

They also understand that swimming throughout the year is not about backstroke technique or how fast they can round the headland. It’s about lifestyle and a reaffirmation of living. It’s about stimulating the senses and the simple glory of seawater.

It’s about some hidden grain of DNA in their bodies expressing itself and having a lark about a time way back millions of years ago when it had a set of gills or had to fight to survive. That’s where sport comes from. Fences go up. But it can never go away.

Future medallists and mentors, many of them over 70-years-old. All of them some way or other making this thing work.