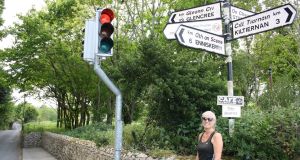 Mary Lou Craig at the crossroads at Glencullen in south county Dublin after one of her daily runs.

These are increasingly conflicting times for the psyche of runners everywhere. More reason and motivation than ever to go running, only less hope and opportunity of an actual race, and Mary Lou Craig has been caught cleanly in between.

With the 2020 Dublin Marathon now joining the list of running events cancelled in the face of Covid-19 – along with most park runs, charity runs and old fashioned fun runs – it could be a while before any starting gun is fired again: at least in the mass participation races of increasing mass appeal.

For Craig, this year’s Dublin Marathon is now officially off her running list too. Her husband Vernon ran last October, thereby guaranteeing his place among the original 25,000 entries for this October’s race, now postponed into 2021, and she was still holding out hope of securing one of the ‘return’ entries in July: everything about her running diary of late suggested this should be the year.

“I always felt I had to try one marathon, and I’d been saying it over the last few years, that this year I had to do Dublin,” she says. “So I entered this year, in the lottery, was waiting on the return entries. Vernon has run Dublin four times already, and got straight in again, and he’s properly disappointed. First thing he said to me this morning was ‘that’s it, it’s officially gone’, because we knew it was doubtful.”

In the meantime her renewed motivation for running has been in near direct proportion to the onset of the global pandemic. Like a lot of people, it’s provided both the time and the need to get out most days, and everything about the benefits are returned in equal abundance – especially as she lives within a hundred metres from the crossroads at Glencullen.

At just under 1,000 feet it’s not exactly high altitude, but Glencullen is the highest village in Dublin by some distance, perched on the border of the Dublin-Wicklow Mountains, and running up the surrounding peaks of Three Rock Mountain and Tibradden can sometimes make it feel a little like the Great Rift Valley.

“Once the Covid-19 situation started, then the lockdown began, I just got more and more into running, just got the itch. Once you start to get fit, it becomes easier. And the more I’ve been running, the more I’ve been thinking I was able for Dublin this year. My limit used to be around 10km, and now I’m up to 15km, and pretty comfortable at that.

“You’re running along, you’re not in a hurry to go anywhere. Normally, you’d be thinking ‘I’ve got to be home’ or ‘I’ve got to pick up the kids’. That’s gone, so I’m finding it far more enjoyable, more relaxed .”

At 46, she may only now be coming into her running prime, although there was some running in her family: in the late 1980s, both her older brothers, Brian and Séamus Donohue, went on running scholarships to the US, to the University of Texas and Charlotte, North Carolina.

“After we had our first child Lily-Mae, who is now 16 going on 17, I decided to start back. I ran up as far as the crossroads and back, and I was in bits. After that I ran the women’s mini-marathon, around 2006, in around 58 minutes. After our second child Isabella was born, I ran the Dublin Half Marathon, in 2012 in 1:58.

“I’ve gone a bit crazy, over 107km last week, 106km the week before. Some of that might be walking, with some friends, but sometimes twice a day, morning and evening.”

With two elderly parents living locally, the necessity of the lockdown was never once questioned, and no matter what the distance the running was always a release: “We’re getting on great at home, but you need your time. On Sunday I was actually thinking of taking a complete break, but really missed it, so by 5 o’clock I was out on the hills again, I just needed to get out.”

Unlike most people, the extension in the exercise radius from 2km to 5km made no difference: left, right or straight through the crossroads it only meant more hills, also opening up more of the Glencullen Adventure Park (GAP), which also serves as the entrance to the Dublin Mountain Way and the endless hilly terrain around the face of Three Rock Mountain.

“Because very little of my running is actually on the road, I think that helps prevent any injury as well, and I knew where each trail goes to add an extra 1km, or 2km. But there’s no avoiding the hills around here. We also had a challenge on a local WhatsApp Group, Gaelic for Mums, to run a marathon, 42km, in three and a half weeks. I ended up running 342km. Breathing is very important on the hills too. Don’t gasp, control it, and take deeper breaths. I was talking to my brother recently, and he said there must be a bit of the Kenyan in me.”