Seán Moran: Marking the departure point in the making of a Rebel double 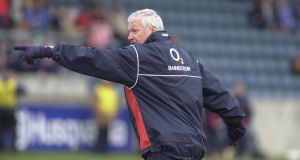 Cork manager Billy Morgan told his players to get down on their knees and pray they would face Meath again later that year in the championship. File photograph: The Irish Times

This Wednesday it will come and go, largely unnoticed but the 30th anniversary of Cork hurlers’ pedestrian win over Kerry in the Munster championship was the point of departure for one of the great achievements in Gaelic games.

With that curious tendency to historical symmetry, 1990 marked the centenary of Cork’s first All-Ireland hurling and football double – one of only three up until that point. Duly beckoned, the county did it again and no one has managed it since.

It gave the GAA a landmark in what was a challenging year. For the first time the Republic of Ireland had qualified for the World Cup and a lot of oxygen had been sucked out of the sporting atmosphere.

The GAA hadn’t learned by then that it was pointless to sit in the road when the soccer juggernaut was rolling. On a famous afternoon, during which Brian Whelahan and DJ Carey made their championship debuts for Offaly and Kilkenny, marking each other for most of the first half, just 17,436 turned up at Croke Park for the Leinster hurling semi-finals.

The double bill clashed with Ireland’s group match against Egypt and history was made when the Croke Park scoreboard flashed out news of the scoreless draw in Palermo.

Italia ’90 was the biggest shot the FAI is ever likely to have in its locker and Gaelic games suffered. Former provincial secretary Michael Delaney lamented that even when the Irish team were just coming home on a bus, the crowds stayed away to watch it on television while a meagre attendance for the Meath-Laois football semi-final made itself even scarcer 20 minutes from the end, as Meath dispensed a punishment beating.

Although equilibrium was restored by the end of Ireland’s adventure and with the unspooling of the championship, it had been a sobering experience. Incoming president Peter Quinn pointed out, shrewdly, that the GAA wouldn’t have to cope with World Cups every year or even every four years.

They didn’t get lucky either.

Gate receipts fell at the All-Ireland stages, not helped by inhospitable draws. Well over 100,000 had attended the previous year’s football semi-finals but they had been a box-office combination, familiar decades later: Dublin and Mayo.

Dublin played champions Cork before 60,168 whereas Mayo reached a first final in 38 years by beating Tyrone before 48,177.

This was a year in which the GAA trembled on the precipice of the modern age. There were big things starting to happen off the pitch as well as on.

Negotiations were in progress for Croke Park to purchase the Belvedere rugby grounds behind the Cusack Stand in preparation for the redevelopment of the stadium.

Then general secretary Liam Mulvihill got the attention of that year’s annual congress by floating the idea of a government-built national arena, which would stage the All-Ireland finals. After the predictable uproar this triggered among delegates, he explained that the association had a choice.

Either support his proposal or get ready to redevelop Croke Park – which as he pointed out had been opposed by several units of the association – because the old stadium wouldn’t be fit to continue for much longer.

It’s likely that not many could pinpoint when such staples of modern football as the line ball being taken from hands and the option of doing the same with frees came into being. But that was 1990.

The ideas came from a football work group, chaired by former Dublin captain and manager Tony Hanahoe. Among the proposals that didn’t make it were the taking of kick-outs from the hand and an altogether more exotic replacement of two halves by four quarters, as had been happening on an experimental basis during that year’s league.

The same competition left trails. The semi-final between Meath and All-Ireland champions Cork maintained an increasingly testy relationship, forged over two All-Ireland finals, one going to a replay which was an unpleasant affair. “This game left another black mark on Gaelic football,” wrote Paddy Downey on these pages.

In the aftermath of another defeat, Cork manager Billy Morgan told his players to get down on their knees and pray they would face Meath again later that year in the championship.

As champions, Cork would have been among the frontrunners anyway but the same couldn’t be said about their hurlers, who a year previously had slumped to defeat against Waterford.

The difference would be the appointment as manager of Fr Michael O’Brien, director of the phenomenally successful UCC Fitzgibbon teams of the 1980s and involved in the management of the previous Cork All-Ireland win of 1984.

If anyone was going to farm the mushroom theory of Cork hurling, it was the Canon.

In keeping with that, Cork reserved their best performances for the biggest matches, an unexpectedly comprehensive turning over of the All-Ireland champions Tipperary in Thurles and in a fireworks display of a final against the 1987 and ’88 winners Galway. It was the 100th anniversary of the county’s first hurling All-Ireland.

“You should win the double now” an encouraging barman told a Cork hurling purist, who mistook it as a reference to minor final ending in a draw. “No, Kilkenny will win the replay,” came the response.

Billy Morgan’s prayers were answered. Cork met Meath in a dire final but it was of huge satisfaction to the winners. Two years previously they had lost to a Meath team reduced to 14 for nearly the entire match.

This time Cork lost a player in the first half and held out to win narrowly in a final featuring nearly a free a minute (69), the county’s first championship win over their then bitter rivals.

“It may lack the style that we’ve seen in football finals in the past,” Ger Canning gamely commentated “but certainly not the passion and the commitment from the two teams involved.”