With social distancing a feature of the sport, organisers target a start date in July 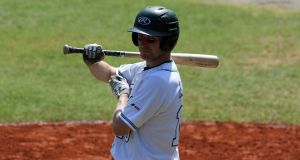 The Irish baseball league is made up of 12 teams in two divisions, with close to 400 registered players across the island. There are teams from Dublin, Belfast, Cork, Monaghan and Ashbourne.

It’s still a couple of months away but Baseball Ireland are already confident that theirs will be the first sports league to get up and running in Ireland as the lockdown restrictions are gradually loosened up.

With social distancing more or less built into the sport already, plans to get the 12-team All-Ireland league underway at the end of July have been sketched out. They may have to institute a couple of rule modifications but, assuming current trends, baseball looks good to go ahead of every other team sport.

“Usually our season runs from April to September,” says spokesman Adrian Kelly. “Now, we hope to start the league around July 25th. In phase four, you’ll be allowed to travel more than 20km so that will allow teams to move around and play each other.

“Before then, we will try to organise friendly matches in local areas during phase three so you’re talking about the beginning of July. I think most of our players would be okay with some minor rule changes. People are just eager to get back.

“Obviously we don’t want to neglect our duty to players, we don’t want to put anybody out there and put them in harm’s way. And ultimately it will be the players’ decision whether to play or not. But at the minute, we are hoping and expecting to be able to get back to full play and get our league started in phase four. Barring things changing, that can happen.”

The Irish baseball league is made up of 12 teams in two divisions, with close to 400 registered players across the island. There are teams from Dublin, Belfast, Cork, Monaghan and Ashbourne involved, made up of a mixture of Irish players and ex-pats from America, Canada and Venezuela.

The great New York Yankees coach Joe Torre said one time that baseball is a team sport played by individuals for themselves. Throwaway line or not, it sounds like the perfect description of a sport that might survive social distancing without too much upset. The occasional situation in which players come into contact with each other can be modified out of the game, at least until it’s safe to bring them back.

“Like every other sport we have a plan for getting going again, in keeping with the government guidelines,” Kelly said last week.

“So from next Monday, we’ll start getting together in groups of no more than four to play catch and do various baseball-related activity. Then after that, from June 8th, we’ve said that club training can happen with limited numbers.

“We’ve left it up to the club to decide what that number should be but we’ve made it clear that social distancing must be observed. Then after June 29th, we’ve said we’ll try and get back and have some friendly games with social distancing throughout.

“Baseball is a game that lends itself to social distancing anyway. Everybody is dispersed around the field and it’s naturally set up that way. The only real contact is people getting tagged when they’re trying to steal bases so we’ll change the rules slightly and make it so that you can’t steal, certainly at the start anyway.

“We’ll also move the umpire and catcher back a couple of metres. It’s a bit more challenging to call balls and strikes that way obviously but people will just have to be a bit more forgiving of the umpires.”

Baseball has already returned in South Korea and the Japanese league is aiming to start up again in June. Last week, Major League Baseball formalised a plan to get an 82-game season going in July in the US, although it is far from certain the players’ union will sign off on it. That obviously won’t be an issue here, although clearly all precautions will have to be taken.

“People will have to bring their own bats and wash down their helmets,” Kelly says. “In terms of balls, we’ll get players to wear a glove on their throwing hand as well as the mitt on the catching hand. So with those little measures, I think we should be back to play as soon as Phase Four begins.”