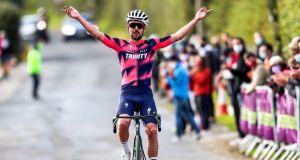 They promised a taste of the new generation and satisfied not once but twice – first Ben Healy, then Lara Gillespie, riding out as headline acts at the National Road Cycling Championships in Limerick.

It means Healy will wear one of the most prized jerseys in Irish sport for the next year, his spectacular win in the men’s senior race on Saturday afternoon earning him the green colours won last year by Sam Bennett, and worn with such considerable distinction over the last 14 months, not least when winning the final stage of the Tour de France on the Champs-Élysées two weeks ago.

With Bennett unable to travel home to defend his title, the race appeared wide open, only for the 20-year-old Healy to finish the 155km course as if it were an individual time trial.

By far one of the youngest and most impressive winners of recent years, Healy – who only turned 20 last month – began pushing the pace on the first of nine 17.1km laps around Knockaderry, just outside Newcastle West, along with Darnell Moore, the duo soon opening a gap on a chasing group of seven and the main peloton behind.

With former two-time champion Nicolas Roche among those giving chase, the young Healy appeared there for the taking, but instead made the most of the dry and bright conditions to drop Moore with just under three laps to go, then ride solo until the finish, leaving the likes of Roche and company to chase in vain – winning by just over two and a half minutes.

“It has been a fantastic few days, I came here wanting to do well and I have achieved everything I could have hoped for,” said Healy, who rides with UK-based Trinity Racing. “This is what every rider wants. Everyone wants to wear the Irish champion jersey for the year and to get the elite one as an under-23 is very special.”

Roche did break off that chasing group and finished second, the 36-year-old Team Sunweb rider having won this title first in 2009 and again in 2016, with Darragh O’Mahony (SwiftCarbon Pro Cycling) from Rockchapel in north Cork continuing his recent improvement to take the bronze medal.

For Healy, who lives in Stourbridge in the West Midlands and first declared for Ireland as a junior two years ago (his grandparents are from Cork and Waterford), it also marks another swift rise in status; on Thursday, he was the outright fastest in the individual time trial, having first won that title as a junior in Sligo in June 2018.

For Gillespie, who only turned 19 in April, victory in the senior women’s race on Sunday came in perfectly contrasting style, the young rider from Enniskerry in Wicklow, now representing UCD Cycling, winning the small bunch sprint to the line ahead of far more experienced rivals, including 2018 champion Eve McCrystal (Strata 3-VeloRevolution), the now 42 year-old who claimed silver, with Ellen McDermott (Team Boompods) in third.

“It was intense from the beginning of the race,” said Gillespie, who tactfully bided her time over the four laps of an undulating 20.5km course. “There was a group off the front, and we were coming up the hill and with about 500 metres to go it just felt like it was going on for ages, so it was a really good race.

“And so many strong women out today, I’m just really surprised that I won, and so proud, I worked so hard all year. I was really motivated.”