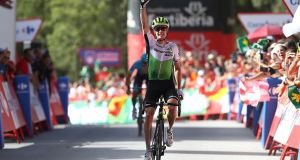 Simon Yates dusted off his Giro d’Italia playbook as he used a late attack to close the gap on the leader’s red jersey in La Vuelta while Ben King recorded a rare victory for Team Dimension Data on stage four.

Yates lit up the Giro in May when his attacking style was rewarded with three stage wins and 13 days in the leader’s pink jersey.

He promised to employ similar tactics in the final Grand Tour of the season and was as good as his word as he put in a dig on the climb up to Alfacar.

The Mitchelton-Scott rider took 27 seconds out of Team Sky’s Michal Kwiatkowski to cut his deficit overall to 10 seconds, leaving him third overall behind Bora-Hansgrohe’s Emanuel Buchmann who is seven seconds off red.

“It wasn’t the plan (to attack), I got carried away but I felt good and I saw an opportunity there,” Yates said. “I don’t really know what I was doing. Maybe I was testing the guys and was thinking someone would come with me straight away but that was that.

“I didn’t mean to. I’m not trying to be cocky or anything, it was just one of those things and when I tried once, I got away.

“It looks like I have gained the time I lost in the other part of the race, in the prologue and the other day with the little kicker, so yeah, it was a good day.”

King took the stage victory out of the breakaway, giving the injury-ravaged Dimension Data team their first major win since Mark Cavendish’s victory on stage three of the Dubai Tour in February.

The American King began the final climb in the virtual race lead with the remaining riders in the breakaway enjoying a lead of more than five minutes over the main group of favourites.

That gap tumbled but as the road levelled out near the summit, King was able to outsprint Astana’s Nikita Stalnov for his first career Grand Tour stage win.

“I set winning a Grand Tour stage as a goal for myself at the beginning of this year,” King said. “It’s just something that I have to keep believing that I have the potential. It’s really affirming. Myself and my wife have sacrificed so much to make this happen.”