Bored? I’m too busy being an Ironwoman

Lots of reasons for people to take on huge feats of running, swimming and cycling 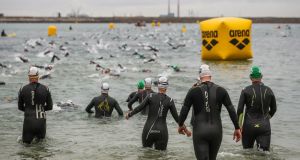 This week I was called to question how bored I must have been to think that doing an Ironman was a good idea. I genuinely did ponder the notion for all of about 30 seconds before getting bored and giving up.

Being a 30-year-old female, perhaps I don’t fit the bill of the would-be Ironman portrayed in an eyewitness account of the Ironman 70.3 Dun Laoghaire published on Monday. I managed to complete a “full” Ironman event last month with not one bit of tape or an existential cry for help in sight.

Endurance sports may seem boring compared to the author’s preferred sport of horse racing, but it’s not boredom that encourages us to turn our lives into organisational obstacle courses.

In my experience, triathletes take on such long distances for the challenge, the buzz of crossing the finish line and, I’ll admit, a decent medal.

I certainly did not have such an abundance of time that fitting in almost 20 hours of training a week for six months did not require some significant sacrifices such as missing my own 30th birthday celebrations and engaging in a relentless battle with my laundry basket.

Brian O’Connor recalled “a large majority” of the event’s participants (most do an Ironman to take part rather than race) “seemed mostly middle-aged men sweating out their neuroses”.

How did he miss the 200-odd strong females who took on the challenge?

Just 175 of the 1,289 finishers of the Dun Laoghaire 70.3 were what he described as “the main demographic traipsing their way around South Dublin and North Wicklow last week”, according to the results.

This isn’t the first time the author voiced his disgruntlement with athletes who don’t ride horses. Two years ago, he wrote a strikingly similar article declaring that people doing Hell and Back-type runs and marathons are “dumb” and proof that “people really are that bored”.

Unfortunately Brian is looking from the outside in, wearing blinkers to avoid acknowledging that these events can actually be a bit of craic, keep you in decent shape and save you spending a fortune on therapy.

There’s no need for it to become an ‘us versus them’ standoff – a divide between those who keep fit and those more partial to taking a long sit.

There’s still a large number standing in the middle ground between exercise-mad and completely sedentary.

I have some good news: it is possible for us all to coexist in harmony.

Let’s face it, Mamils (middle aged men in lycra) can be unsightly, but they’re not intentionally trying to make you feel inferior.

These men are more likely to be escaping a long list of responsibilities in the home and you too could avoid children’s parties, DIY and housework for the price of a bike.

Sure, some of the more affluent male demographic do spend outrageous amounts of money on “speed” – overpriced items that are supposed to make them faster – when really they’d gain a more substantial benefit by having one scone instead of two on their long weekend spin.

I can understand why some people just don’t get it and why they might warn about the dangers of needing joint replacements and over-exercising. But in reality, the health conscious triathlete is much less likely to clog up the health system in later years than the pint-guzzling bar prop or couch potato.

Completing an Ironman, especially a gruelling course such as the 70.3 of “half” distance in Dun Laoghaire, probably the toughest course of its distance in Europe, requires guts, determination, discipline and motivation.

The strong-will displayed by dedicating oneself to a challenge of such magnitude may be intimidating to some, but taking any substantial risk in life deserves respect.

Brian makes some valiant points, but his delivery is insulting to the majority of those who take part in such races.

Triathlon may not be pretty at times, but look at any GAA pitch or rugby field and you’ll see a lot more bodies “being held together by plasters” than in an Ironman.

An Ironman isn’t for everyone but nor does it have to be. Triathlon is a sociable, inclusive sport with a broad range of ages and a decent balance of genders. Of course there are some extreme cases of Ironman fanaticism (entire families clad from head-to-toe in M-dot branded clothing), but more are there for the craic and camaraderie.

It’s inspiring to see my peers at Piranha Triathlon Club training and competing at a huge variety levels – from try-a-tri to Ironman.

We’d welcome you in anytime, Brian.

German clubs resume training amid tight virus restrictions 12:17
Report says PGA Championship is rescheduled for August 12:12
All in the Game: Capello plumps for Calamity James over Joe Hart 10:20
The Offload: Roll up for rugby’s very own horror film 09:00
Ken Early on Mick McCarthy II; racing will endure even the harshest criticisms 07:19
Here is your handy guide to sport on television this week