Eoin Morgan grateful to his native Ireland ahead of first ODI 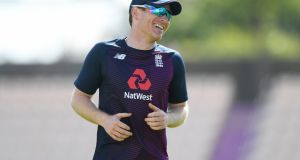 England captain Eoin Morgan ahead of the first ODI against Ireland at Ageas Bowl in Southampton on Thursday. Photograph: Getty Images

It is now established that Test cricket works better than most expected behind closed doors. On Thursday there is the opportunity to gauge whether the white-ball game, usually a much noisier one, can produce a worthwhile spectacle.

At the Ageas Bowl, England play the first of three 50-over matches against Ireland in their first outing on home turf since winning the World Cup, so they have to step out without fanfare. Not that the captain, Eoin Morgan, seems too bothered by that. “Given the context of the last five months,” explains the Dublin native who played for Ireland until 2009. “I’m just delighted that we’re back playing again and that we have cricket back on TV. I’m extremely grateful to Ireland for agreeing to play.”

Morgan says he has spoken to some of the Test players about playing in a deserted stadium. “There are moments in a Test, usually when the Barmy Army are going mad, when there is obviously home advantage. I think the most difficult challenge may be in the field, maintaining a high standard throughout and keeping that intensity.”

Other challenges for Morgan have been more familiar. We are frequently informed that there are more players who England want to play than spaces available. That still seems to apply even though six of Morgan’s World Cup winners are engaged in the Test series and so are not available.

“Selection was particularly difficult,” said Morgan. “Over the last four-and-a-bit years we’ve always had tough decisions to make and I think everybody who was left out had a tough call.”

He says that still applies when whittling down the one-day squad for these matches against Ireland. “The standard and skill level that has been produced since the guys have come together has been exceptional. It’s been way above the standard that I expected given the time we had off. Certainly [Phil Salt of Sussex and Warwickshire’s Sam Hain] were unlucky to miss out and so were a few others. I think we’re blessed with a high-calibre group of top-order batters, not only in the first XI but also sitting in the wings.”

Those batsmen may be gifted and most of them are remarkably old. Of the specialists in this squad only Tom Banton of Somerset is under 29. “I think there is the perception that they’ve almost had their chance and their time has gone,” said Morgan.

“Whereas we see it that going into the next World Cup, we need experienced guys making good decisions under pressure. That’s exactly what we’re after and experience lends itself to that. We’ll continue to give opportunities but it’s to those guys we feel might have an impact in selection on the next two T20 World Cups or the next 50-over World Cup.”

Ireland are now led by Andy Balbirnie and they have omitted some familiar names such as Gary Wilson, George Dockrell and Mark Adair. But some old favourites remain in Kevin O’Brien, William Porterfield and Boyd Rankin. Most unfamiliar on this side of the water are Gareth Delany, Harry Tector and the all-rounder Curtis Campher.

This match heralds the start of the Super League, the qualification process for the 2023 World Cup. “This Super League is our opportunity to get in,” says Balbirnie. “And it’s going to be super-tough.”

One other innovation is that no-balls will be called by the third umpire in this series, hopefully not too often. - Guardian