Mark Adair returns as Ireland aim to finish on a high 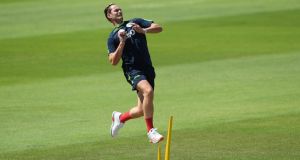 Mark Adair is the only change to the Ireland squad for Tuesday’s match against England. Photograph: Getty Images

Ireland have made one change to the 14-player squad for Tuesday’s third and final one-day international against England at the Ageas Bowl in Southampton.

The fast bowler was Ireland’s leading wicket-taker last year but marked his comeback from an ankle operation by leaking an eye-watering 74 runs in eight overs as England Lions chased down 297 in 34.4 overs the weekend before the first match of the series.

Andrew White, the chairman of the national men’s selectors added: “the last ODI is certainly not a dead rubber, given the World Cup Super League points up for grabs.

“We’re looking for a strong finish with a more complete performance from the squad. There have been plenty of positives from the first two games - particularly Curtis Campher’s all-round efforts - and if the squad continue to show the tenacity and fight which saw them reduce England to 137-6, then hopefully we can close it out and finish the series on a high.”

Each team will play an ODI series against eight of the twelve opponents, four series at home and four away. Each series will consist of three ODIs. For the World Cup, the hosts (India in 2023), and the top seven-ranked sides thereafter, will qualify automatically. The remaining five teams will play in a qualifying event along with five associate sides, from which two sides will go through to the final tournament.

Aaron Connolly rounds off a fine afternoon for Brighton 16:35
Tottenham offer out of favour Dele Alli to PSG 16:27
Wolves to sign Nélson Semedo to replace Matt Doherty 15:43
Ulster’s European dream clinically crushed by Toulouse 15:39
Racehorse owners to return to tracks in Ireland on Monday 15:11
Here is your handy guide to sport on television this week