An unforgettable pilgrimage to Caesars Palace to see Barry McGuigan

Sporting Cathedrals: In the stifling heat of the Nevada desert the Clones Cyclone suffered 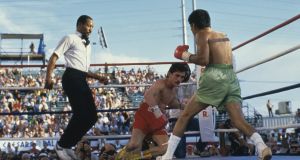 Referee Richard Steele looks on as Irish boxer Barry McGuigan falls during his defence of the WBA world featherweight title against Steve Cruz at Caesars Palace, Las Vegas, June 23rd, 1986. McGuigan led during the first half of the match, only to suffer severe dehydration, which contributed to a unanimous points decision against him after 15 rounds. Photo: Mike Powell/Getty Images

We flew down from ‘The Haight’ in San Francisco, our destination a hospitable but lurid hooker in the Nevada desert – Las Vegas.

We were a crew from The Plough and Stars on Geary Street. An Irish bar, it was the cashier of our cheques, our social hub, our music venue, our comfort blanket. ‘The Plough’ was where a plastic bucket was passed week to week to pay the fare home of the latest Irish wetback who had fallen off the scaffold or knitted his hand into the engine of a generator.

Innocent but hard bitten, all. Vegas and Caesars Palace positively appeared to be lusting when it was announced Barry McGuigan, a heavenly figure among Irish boxers, was coming to the desert for the defence of his WBA title against Steve Cruz. The Irish featherweight would fight on the undercard of middleweight Roberto Duran against American Robbie Simms in the neon Babylon.

Vegas was, well, Vegas, while Caesars Palace had grown into a bye word for Hollywood A-listers, celebrity gangsters, big fight weekends and never less than wicked and seedy.

With the ghosts of Mafioso Meyer Lansky and Bugsy Siegel still haunting the casinos, the billing of the Clones Cyclone with chilled Ulster Hall blood running through his veins seemed, in the shimmer of Nevada, a quaintly innocent product misplacement.

McGuigan had beaten Eusebio Pedroza of Panama at Loftus Road the year before for the world title and positively rattled Irish heads. The fight against the relatively unknown Cruz was a pay day, a stepping stone towards uniting not just sectarian communities at home, but world belts.

One simple instruction: everything stays in Vegas, right? Right! A short hop south and as the plane door opened the unforgiving heat of June met everyone, instant and disagreeable. Perplexed, people looked to the wing of the aircraft thinking the jet engine was blowing shards of scorching air that stung like glass. A hot desert breeze, we had landed on Mars.

On a nearby roof a giant digital thermometer clocked 110 degrees. Before we hit the tarmac at the bottom of the steps the sweat was rolling. On the street outside asphalt melted.

Even the strip was suffering from heatstroke. The Paddys weren’t taking it well. We slipped and slushed in our own sweat, antsy into the minibus. We were booked into the Sands Hotel, a several hundred room monolith to functional architecture and strode out the next morning to find Caesars Palace.

Calluses from humping scaffold tubes, paint on our nails and sealing caulk permanently caked in our hair. Green corduroys. Who wore shorts in those days anyway?

Caesars Palace wasn’t hard to find. The city was all streaming in one direction. We followed Bob Geldof, Paula Yates, Annie Lennox and Dave Stewart for a block before realising how it could be that a smooth Haight-Ashbury crew in Sin City could be so un-cool.

Shortly after I jumped on the back of Jed’s monster cc Suzuki. No sun screen, no helmet, no shades. He had ridden it down from San Francisco through Death Valley and was now spinning round the malls and casinos on a liquefying road.

Vegas unclothed, the strip lights turned off, the edginess not there and the grime visible; it seemed then a city of steel security doors, food delivery lorries, wide, wide avenues and tatty buildings unadorned by coloured light shows. Plastic furniture.

The Stardust. The Golden Nugget. The Riviera. The Flamingo. Three dollar steak dinners and beer for 50 cents. A vampire city unable to roll out of bed while the sun is up. But at night it sucked blood.

Soon enough Caesars Palace loomed into view, a Greco-Roman fantasyland with marble reproductions of classical statues. Nude and muscle. Male and female. Art deco, a little Nazi. Hollywood. Fluted columns and pediments. Facades and fountains. Nothing small. Nothing manageable in size. Nothing left to the imagination.

Decadent and vast, it was difficult to tell where the building began and where the towers ended. But somewhere inside Frank Sinatra, Dean Martin and Tony Bennett had been drawing in the high rollers for years. Bold, venal and loved, Sinatra recorded live performances in the Palace in 1978 and again in 1982.

The alliance The Palace had reached with respectability or wholesomeness seemed at best uneasy and forced. The brothel was out of town at “The Chicken Ranch” but escorts were, well, in “force concentration” and primed for “night combat”. Everywhere.

It was the big pretend and everyone was in on it. Boxing and gambolling. Blood brothers that was again generating a particular kind of contrail, a mix of wide screen royalty alongside a raft of human flotsam and jetsam.

It was late afternoon when we parked the bike. The first glimpse of the arena was a rising aluminium skeleton of scaffolding and seats. An amphitheatre with a boxing ring in the middle, a canvas hung above and a nest of television cameras and lights.

It was not in the Caesars Palace Casino but the carpark outside, a set up they had used many times before. For Larry Holmes against Ali in 1980, the sweeping parking bays were also the site for a temporary 24,790-seat outdoor arena. Back then they had former heavyweight champion Joe Louis meet and greet at the entrance to the casino. Down on his luck, they paid him a lousy $50,000 a year to lick ass.

The first professional fight sponsored by Caesars Palace was Ali against British heavyweight Joe Bugner in 1973 although, the bout took place at the Las Vegas Convention Centre.

Evander Holyfield and Riddick Bowe were in the carpark when a paraglider flew into the ring during the seventh round of their heavyweight bout. Oscar De La Hoya fought Julio Cesar Chavez too. Under the desert sky.

Wee Barry, though, had a problem. Fernando Sosa was his opponent before the Argentinean’s detached retina forced a withdrawal. A replacement was needed and promoter Bob Arum found one locally in the relatively unknown Cruz.

Tall, rangy and 22-years-old, Cruz was not the squat South American Sousa, who McGuigan had trained to beat. Cruz was unavoidable. The brutal heat, that was not. Even the world’s biggest stars and stripes flag, unfurled from the roof of an adjacent tower and falling from 10 stories, landed limp and lethargic.

Then Michael Buffer handed the mic to Pat McGuigan, Barry’s father and “Danny Boy, the pipes, the pipes are calling,” carried out over a burning Vegas strip. Father Brian D’Arcy, who had prayed with McGuigan on the morning of the bout, would later disclose the Clones Cyclone was far from blowing hard.

That night it is scant consolation that the great Duran also lost to Simms. The history is cruel, a desolate and distressed McGuigan visibly shrinking minute by minute towards critical dehydration having led to the midpoint of the fight.

Wasted and wan against the dark Cruz, the blazing sun finally fell behind the back of the metal stand. By then McGuigan’s eyes were uninhabited. Although Cruz failed to connect with any punches of vigour, McGuigan went to the canvas two or three times before the Texan was declared the winner. The Irishman was hospitalised.

We fanned into the Palace wordless and it seemed then the whole edifice was phonier than could be imagined. A phoney ring in phoney heat and in a phoney city, the notion of unifying world titles another desert mirage.

All that was left was to cosy up to the Grand Dame of Vegas, the first true themed 640-room resort along the strip, its shag pile carpeting and floor-to-ceiling windows, its round beds and whirlpool tubs pre-dating, in 1966, the moon landing. So good was the idea of Caesars Palace that the Teamsters union lent Jay Sarno and Stanley Mallin $11 million from the Central States Pension Fund for the build.

When it opened its doors Caesars Palace transitioned perceptions of Las Vegas from a desert town for the mob and gamblers into a permissible, glamorous landscape. The water features and palm trees, the exaggerated historical Roman themes a removal from the humdrum and the real. That at least was the schlock.

In the 1980s it had become a symbol of the city, a kitschy pastiche of American excess, where there was something for everyone from the high roller to the low-end Irish painting crew.

“A little bit of this town goes a very long way,” said Hunter S Thompson in Fear and Loathing in Las Vegas.

We left Caesars Palace and the cooker for the chill of northern California and Haight-Ashbury’s sobering AIDS epidemic and explicit safe-sex posters stapled to the telegraph poles on Masonic, Cole, Stanyan and along the Pan Handle to Golden Gate Park and over Beuna Vista Park to Castro.