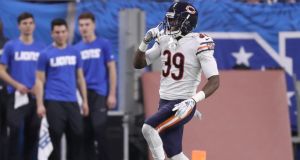 Eddie Jackson of the Chicago Bears celebrates his touchdown after intercepting a pass from Matthew Stafford of the Detroit Lions at Ford Field in Detroit, Michigan. Photograph: Leon Halip/Getty Images

Eddie Jackson returned an interception 41 yards for the go-ahead touchdown with six minutes remaining, and the Chicago Bears held on for a 23-16 Thanksgiving Day victory over the Detroit Lions at Ford Field.

Chicago quarterback Chase Daniel, who hadn’t started a game in almost four years when he played for Kansas City, completed 27 of 37 passes for 230 yards and two scores. Daniel filled in for Mitchell Trubisky, who missed the game with a shoulder injury but is reportedly expected back in Week 13.

Tarik Cohen caught seven passes for 45 yards and a touchdown for the Bears (8-3), who won their fifth straight game.

The Lions were missing two key offensive players, as running back Kerryon Johnson and receiver Marvin Jones sat out with knee injuries.

The Bears regained the lead with 13:40 remaining on Daniel’s 14-yard pass to Cohen, capping an 82-yard drive. Detroit tied it with 7:44 left on Matt Prater’s 20-yard field goal.

The Lions then forced a punt, but on the next snap, Jackson stepped in front of tight end Michael Roberts and sauntered 41 yards into the end zone to give the Bears a 23-16 advantage with six minutes left.

Stafford responded by driving the Lions 64 yards into the red zone, but he was intercepted by Kyle Fuller in the end zone with 1:07 left. Detroit still had three timeouts remaining, but Cohen’s 10-yard carry on third-and-nine let the Bears run out the clock.