North Korean fans sing ‘we are one’ in Olympics culture clash 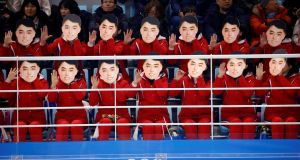 North Korea’s cheerleaders hold up masks during one of their songs at the women’s ice hockey match between Korea and Switzerland at the Winter Olympics. Photo: Brian Snyder/Reuters

As Switzerland demolished a unified Korean hockey team at the Pyeongchang Winter Olympics on Saturday, despondent home fans at least had another contest to distract them – a clash of cultures featuring North and South Korean cheerleaders.

The North Koreans, wearing full-length red jumpsuits and arranged in tidy rows on each side of the rink, at times competed for the crowd’s attention against mini-skirted dancers from the South, dressed completely in black and knee-high boots.

As the North Korean squad chirped encouragement like “Unify the motherland!” and “Win, win, our athletes win!”, the women from the south gyrated to pop music, exposing a cultural gap every bit as wide as the scoreline on the ice.

Neither approach inspired a goal from the home team, which went down 0-8, but it was clear who connected with the mainly young South Korean fans, who have grown up physically separated from the poor, one-party state to the North.

It was the first time the North and South, still technically at war, had fielded a unified Olympic hockey team.

“They were fresh but a bit weird to me,” university student Kang Gwang-mo said. “They’re a bit old fashioned ... but it was meaningful that we shared this moment together.”

As the fans sang and bopped to the rhythms of rap, rock and pop played over stadium speakers, the North’s cheerleaders countered with a North Korean pop song that was popular a decade ago, the last time the two Koreas were trying to make peace.

Only older members of the audience seemed to know the words.

From the moment they entered the stadium to the tune of “Eye of the Tiger” and Darude’s “Sandstorm”, the North’s cheerleaders knew they had competition.

With the stadium reverberating to everything from Metallica to the 1999 hit “Boom, Boom, Boom, Boom!!” by the Vengaboys, some fans hadn’t even noticed the cheerleaders walk in.

“Oh my god they’re coming in right next to us!” said one spectator as they filed in, carrying blue bags and followed by a scrum of photo journalists and excited onlookers.

From inside their bags, the cheerleaders produced props that would accompany their chants: a unified Korean flag, some paper flowers and some masks.

“That’s scary,” another spectator said to another as the cheerleaders put on a man’s mask in perfect unison.

During an intermission, South Korean rappers Dynamic Duo took to a stage and worked up excited young South Koreans around them with a version of Mark Ronson’s “Uptown Funk”.

Later, the North Korean cheerleaders responded by singing “We are one!”, swaying from side to side in a perfectly choreographed display of unity and discipline.

“Today’s victory is ours!”