Wimbledon 2018: Change in the air as the old order falters 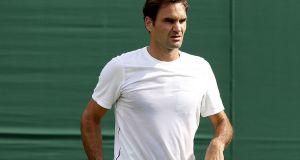 Roger Federer: he will be 37 in August but is bidding to claim a remarkable ninth Wimbledon men’s singles title. Photograph: Matthew Stockman/Getty Images

Since Roger Federer first won the men’s singles title at Wimbledon in 2003 there have been four different champions. The monoliths of Federer, Rafa Nadal, Novak Djokovic and Andy Murray have shared it among themselves unequally, Federer eight times, Djokovic, Nadal and Murray twice each.

In the women’s singles there have been seven winners in that time period with Serena Williams winning it six times since 2003 and seven times in all, her first win coming in the previous year.

Since then only two other female players have won the singles title more than once, Serena’s sister Venus, twice and Petra Kvitova twice, with Venus winning it five times in all.

This year health, pregnancy and broken bodies have brought players into a much sharper focus than ever before with several arriving in London more in hope than expectation. Time is etched on the faces of many of the previous champions.

Federer will be 37 in August. Williams, a recent mother, will be 37 in September and her sister is already 38. Murray and Djokovic are 31-years-old and Nadal was 32 earlier this month. They will tell you age is just a number.

But in sport it is not.

Djokovic spent the last six months of 2017 sidelined with an elbow problem which required surgery. The Serb returned to play this year but didn’t find any form until the French Open where he reached the quarter-finals. He’s still out of sorts and searching for confidence.

Murray has only played three competitive matches since limping out of the championships last year and he underwent hip surgery in January.

As recently as last Wednesday night, he was still undecided about playing and could still withdraw up until he is scheduled to play on Tuesday against world number 48 Benoit Paire. Surviving the first week would be a triumph for the unseeded Scot.

Skipping the clay season again, Federer lost at Halle for the first time in 10 years to Borna Coric, who had never beaten him before. Coric had claimed his first win over a top-10 player on grass earlier in the week when he knocked out Germany’s Alexander Zverev.

The detail of the defeat is that Federer in some points in the third set appeared a fraction off the pace. The disappointing end also stopped him hitting a number of career milestones. A win would have given him his 10th Halle title, a 21st consecutive win on grass and 99th career title.

Nadal has no physical complaints and coming off his 11th win at the French Open has proven himself to be the best clay court player that ever lived. But his last win at Wimbledon was eight years ago in 2010. Injury aside he has not been able to transfer his game from the clay and adjust it to grass since his 2010 win and the victory in 2008.

Of the top 10 women seeds this year only three players have ever won the title, Muguruza, Kvitova and Venus Williams. That’s an open draw.

Serena and Venus as well as Maria Sharapova, who has not recovered from her 2016 Meldonium ban, have fallen to 25th seed, 9th seed and 24th seed respectively. There’s little empathy for the oldies.

Serena removed herself from a showdown with Sharapova in Paris because of a muscle injury. But the American’s seeding might just be rendered unnecessary if the mood strikes her.

No matter wherever she is placed in the pecking order, she is the player to beat at every tournament she enters.

Since Williams’ Australian Open triumph in 2017, which she scripted in the first trimester of her pregnancy, five different women have won the five Grand Slam titles. Of that, four were first-time major winners.

So Wimbledon shouldn’t be any different with the added advantage of carrying a torch for another rare group in elite sport: mothers.

Her bitter rival Sharapova decided not to compete in Birmingham this year. Instead, the 31-year-old chose to play a couple of exhibition games at the Aspall Tennis Classic at the Hurlingham Club, a corporate jolly run by her management group IMG. Her eye has never moved off that ball.

Not for the first time has there been speculation that the pillars of the game are crumbling and are facing their own personal battles as they hit early-, mid- and even late-30s.

Although Federer and Serena Williams particularly, have threaded a narrative around defying conventional wisdom on ageing and its effect on performance, auras have been broken. The world of tennis looks more open now that it has been for some time.

Borna Coric (17): Maybe the Halle final was as much to do with Roger Federer as Coric. The 21-year-old Croatian had only two career grass court victories prior to preventing Federer from completing the perfect 10 titles. He roared into the final without dropping a set and called his work the “most unbelievable week of my whole life.” Self-belief is high, fear of grass gone.

Nick Kyrgios (16): Yes it’s a stretch given his explosive personality. But if his physical talent was matched by mental strength the Australian would have already been a major winner. A wicked serve and a fine, unpredictable touch, he reached the semi-finals at Stuttgart, had a run at Queens, offended the BBC with profanities and fell to Cilic in two breakers. Foul-mouthed, profane, vulgar. Bring it on.

Dominic Thiem (7): He’s a clay player. But if you get to the final of Roland Garros, losing to Nadal, you can do well on modern grass. He’s a fabulous player and the world number seven. He made the final 16 last year when he fell to Berdych, a player who gives Federer trouble on grass. He’s a long-shot but then there’s the thing about form being something and class permanent.

Ashleigh Barty (17): Oh come on what’s going on in Oz? She became the first Australian to win a WTA title on grass this century, beating British hope Johanna Konta in Nottingham. A compact natural grass player with a performing serve was the junior champion not so long ago. Did we say she lost first round last year? A dangerous floater then.

Serena Williams (25): Williams has played three events in the past 12 months and is ranked 183rd in the world. Nobody in the history of tennis has a right to come in and threaten to win. But she will. When that serve gets going, nobody can take it. Movement, injury, they will be her issues. But her young daughter’s middle name isn’t Olympia for nothing.

Magdalena Rybarikova (19): Moves very well, vital on grass and has a dinger of a serve, more accurate than big on muscle. At 29-years-old she knows time is running out for her but that can help too and her composure under pressure is another strength. Made the final of Birmingham before falling to twice Wimbledon champion Petra Kvitova.