Team Sky cyclist Chris Froome says he has not broken any rules following a positive test for excessive levels of the asthma drug Salbutamol at this year's Vuelta a Espana. Video: Reuters 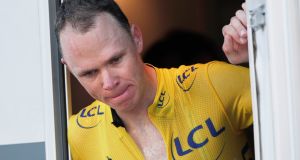 The verdict fell suddenly in the nine-month saga of Chris Froome’s adverse analytical finding for Salbutamol.

Most notably it wrongfooted the Tour de France organisers, who were expecting a court hearing on Tuesday morning to resolve their attempt, dating back three weeks, to refuse Froome entry to their race on the grounds that with the outcome in abeyance his presence would be damaging for the image of their race.

That attempt was rendered irrelevant immediately on Monday morning when a statement from the UCI cleared Froome of any wrongdoing. Crucially, given the length of time the process had taken, there were no hints of a possible appeal.

There were also, however, few details from the governing body; an explanation came from the World Anti Doping Agency, which – the UCI made clear – had been involved from relatively early in the proceedings.

The Wada statement said, in essence, that Froome had demonstrated the levels of Salbutamol found in his urine samples varied widely enough for the finding to be within a certain margin of error (“demonstrated within-subject variability in the excretion of Salbutamol”), and that he had been ill and had upped his dosage.

Above all it’s a pity that we have had to wait for months, because the lack of answers in all this time has obviously given rise to indecision, doubt and thus to suspicion

It also accepted that in his case a comparative study was not possible because it was impossible to replicate the conditions in which the sample had been taken. Crucially, the statement concluded “the sample result is not inconsistent with an ingestion of Salbutamol within the permitted maximum inhaled dose”, mentioning also that there had been “chronic use of Salbutamol at varying doses over the course of weeks of high intensity competition”.

The verdict left Froome in the clear to attempt a record-equalling fifth victory in the Tour de France, a double of Giro d’Italia and Tour de France in the same season, and a “quat-trick” of four grand tour victories in a row: Tour and Vuelta 2017, Giro and Tour 2018.

Critically it fell before the start of the Tour de France, eliminating that court case between the four-times Tour winner and the organisers and removing any potential ambiguity over the results of the 2018 Tour. Fans would be able to watch Froome racing in the knowledge that the case was no longer pending.

The Tour director, Christian Prudhomme, was – understandably – frustrated at the way in which events had left his organisation with egg on its face and he bemoaned the length of time that the proceedings had taken.

“Above all it’s a pity that we have had to wait for months, because the lack of answers in all this time has obviously given rise to indecision, doubt and thus to suspicion. That’s where we have ended up.”

Not surprisingly Prudhomme added that in his view cycling should move as quickly as possible to having provisional suspensions for all adverse analytical findings.

“[The UCI president] David Lappartient has already said that he would like to move in that direction and we absolutely need to head there so that we do not end up in a situation like this, where we get an answer at the final moment. Clearly the rules need to be changed.”

That would also end any debate about whether AAFs should be kept confidential.

The one thing lacking in the verdict was a detailed exposition of the nuts and bolts of Froome’s defence, although the cyclist told Sky News that he would be making information public in the next few days.

This is a case where they need to release the report in order to silence the agitators. I’m bamboozled to be honest

The lack of detail was bemoaned by one anti-doping expert; Robin Parisotto, speaking to the website cyclingnews.com, said he felt it detracted from the verdict.

“It’s now about having full access to the reasoned decision as it’s hard to comment without it,” said Parisotto, a former member of the UCI’s Biological Passport programme. “This is a case where they need to release the report in order to silence the agitators. I’m bamboozled to be honest.”

The Froome ruling raised other questions, most notably whether it had established a precedent for further Salbutamol cases. Wada rules – as quoted in the organisations statement on the Froome case – specify that, if Salbutamol is found over a certain threshold, it “is presumed not to be an intended therapeutic use of the substance and will be considered as an AAF unless the athlete proves, through a controlled pharmacokinetic study, that the abnormal result was the consequence of the use of the therapeutic dose (by inhalation) up to the maximum dose indicated above”.

The Froome ruling appears to have departed from that particular part of the rule, because a key factor in the case was the fact that the study could not be carried out in a way which replicated those in which the sample was taken. That will most likely be claimed to apply in other cases.

The question of where it left the threshold for Salbutamol was also hanging; perhaps Salbutamol would go the way of caffeine, where it proved impossible to regulate the substance by working with a permitted threshold and it was eventually legalised to avoid confusion.