Volvo Ocean Race Diary part 16: Like a game of Tetris in the ocean 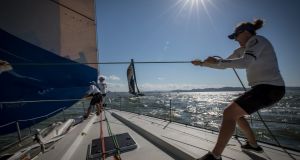 We’ve had a good week, everyone is in good form on the boat and just in the last day we had decent wind for the first time in this eighth stage of the Volvo Ocean Race on board Turn the Tide on Plastics.

Up until now it’s been shorts and T-shirts and maybe a smock when for rain showers but now we’re into the full force of the northeast trade winds so we’re back to full wet-weather gear and the usual firehose experience for a Volvo 65-footer.

As always, the first few days of the leg are always hard, tired all the time even though I’m getting a lot of sleep I feel tired all the time. Then you get used to the disruption and now I can survive on very little sleep if needed.

We were making slow progress after leaving Itajai. After three days, our skipper Dee (Caffari) told us we’d actually only done 300 miles in that time. With decent wind we’d normally be clocking-up 400-500 nautical miles every day so that was hard to hear how slow we were going.

But at least we were in with the leading pack and when a big cloud came along, we decided to go right to avoid it and everyone else decided to go left.

When we reached the other side of the cloud, we popped out into the lead 10 miles in front of everyone else which was pretty nice, especially as we got each six-hourly position report that showed we were the fastest boat in the fleet!

And we held first place for almost five days until we reached the doldrums over the weekend.

But once we reached lighter winds, we slowed and the chasing pack gained on us.

After that, we started an intense series of gybes – turning the boat with the wind coming from behind us so that the sails change from one side of the boat to the other – that became so frequent that when I was off-watch and asleep in my bunk, I’d get called up on deck complete the gybe then go below again to sleep before getting called back again after 20 minutes sleep.

The second you lie down you’re dead asleep and then suddenly, someone is shaking you awake again.

In one off-watch we gybed four times. In these easier conditions, each gybe takes anything from 15 to 20 minutes to complete. First, we move the stack of unused sails from the “high-side” of the boat across the deck to the new high-side once the turn is complete.

This weight helps trim the boat once up to speed again after the sails are set when the manoeuvre is complete. Then the off-watch crew have the lovely task of going below to a hot and humid cabin to move all the food, equipment and clothing bags from the old “‘high-side” to the new high-side, again to stack the weight for best trim.

This is great fun – especially at night – it’s like a game of Tetris except with around 800 kilo bags of bits to find slots for and all the while just wanting to crawl into bed.

Yet, despite the intensity of the gybing duel, we were still aware of how close we were to land once again having been hundreds of miles offshore and we could see the streetlights on the shore as we sailed past.

The next morning, we could also see Brunel and Dongfeng once again and the battle for the lead has been underway ever since.

At one stage stage, it looked like we were heading for Venezuela instead of north but we were actually trying to get into better current to get a good crossing at the Equator. All three boats gybed at the same time and have been on course for Newport, Rhode Island since.

Meanwhile, our Equator crossing was a pretty tame affair; this is my fourth time sailing across it in the last six months. The first time, I was one of those initiated and each crossing since it has been someone’s first time but not anymore. This time it was simply “oh look, we’re now in the Northern Hemisphere that’s nice – we’re on our way home!”

Getting through the doldrums meant avoiding huge clouds, some 100 miles wide. Sometimes you can get lucky but usually the wind alters significantly against you once under these clouds or you have the wrong sail combination so finding the quickest way around them is essential.

But now we’re blasting along, constantly wet but getting 500 nautical miles a day clicked-off and our ETA into Newport has improved from next Thursday to Tuesday but it could slip back again. But its looking like a drag race from now to the finish.

Thankfully, our boatspeed is helping with the massive amount of seaweed around. If we were going slower it would get caught around the boat’s appendages – keel, rudders and daggerboards – but we’re going fast enough for it to be cleared off.

It’s always a bit of a shock when you get hit on the head by a flying fish in the middle of night – not quite what you expect. I’m not injured but my hood has flying fish blood and scales embedded into it.

The smells on board these boats after a few weeks at sea aren’t the nicest ever and this definitely won’t help. My hood will probably need to go through a washing-machine 10 times to smell normal again.

Overall, we’re in a good position for the Newport finish and it’ll be difficult for the boats at the back to catch us.