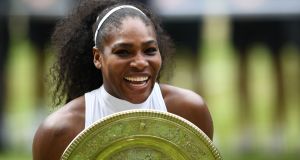 Serena Williams, who is rebuilding her career the hard way at 36 after the difficult birth of her first child last September, will almost certainly be seeded at Wimbledon, despite extraordinary confusion at the All England Club on Tuesday.

The American is guaranteed a place in the main draw of a grand slam through her protected ranking but, according to the ambiguous rules of the Women’s Tennis Association, it was not clear if she could be seeded among the top 32, which affords the best players protection in the early rounds of a tournament.

When it was pointed out the club’s rule book for the championships stated: “The seeding order follows the WTA ranking list, except where, in the opinion of the committee, a change is necessary to produce a balanced draw,” they were reluctant to offer a definitive opinion.

Brook acknowledged Williams’s pregnancy was, “totally different from an injury” – over which there would have been no dispute – and added: “We have empathy and sympathy with the point being made.”

However, Lewis later told the BBC: “There have been examples where [female] players have been moved up the seedings if they are in the top 32,” but he thought it was “unlikely” the committee would bump another player out of that group for Williams.

Then, after a hurried transatlantic phone call to the WTA’s chief executive, Steve Simon, Wimbledon issued a quick reappraisal that strongly suggested there would be no problem giving Williams a seeding.

A spokesperson said: “It is reasonable to state that the committee would have the discretion to seed a player for the championships, regardless of [her] WTA ranking. This discussion [will] take place at the seedings meeting on June 26th.” The championships begin on July 2nd.

Having thus conceded Williams has a strong case – and one that may set a precedent in the women’s game – it would be difficult for the seedings committee to exclude her from a place in the top 32.

That would also save the club the inconvenience of a row with a champion widely acknowledged as one of the greatest in the history of the game. She has won seven of her 23 majors at Wimbledon.

In an interview with the New York Times this week, Williams made it clear “pregnancy is not an injury” and should not debar a ranked player from resuming the game at or near her previous level – a sentiment acknowledged by Brook on Tuesday afternoon.

Williams won her last major at the 2017 Australian Open – when she was seven weeks pregnant, it later emerged – and signed off from the Tour that April, to give birth to Alexis Olympia. In an article for CNN in February, she revealed she almost died after the pregnancy because of a pulmonary embolism, a condition that has haunted her for years.

Her comeback, which began in an exhibition match in Abu Dhabi on December 30th after being confined to bed for six weeks to recover from her near-death experience, has been stuttering and uncertain as she strives to regain full fitness.

She decided at the last minute not to defend her Australian title in January and next played in doubles for the US with her sister, Venus, in a Federation Cup tie against the Netherlands in February, but still was not anywhere near her intimidating best.

Since then, she lost to Venus in the third round at Indian Wells and in the first round of Miami to the Indian Wells champion, Naomi Osaka. It was there, close to her home in Palm Beach Gardens, that the row over being denied a seeding because of her absence through pregnancy was ignited. On Wednesday, it flickered into life again.

One player who will back Williams strongly in her bid for a seeding is Andy Murray, who last year at Wimbledon corrected a journalist who called his quarter-final conqueror, Sam Querrey, the first American to reach a slam semi-final since 2009. “Male player,” Murray reminded him.

Meanwhile, it was announced yesterday that the total prize pot for the 2018 championships wil rise to £34 million (€38.6 million), up 7.6 per cent from last year.