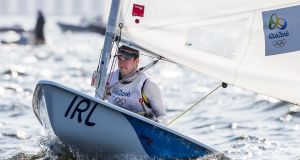 With an eye firmly on qualifying Ireland for the men’s lightweight single-handed event for the Tokyo 2020 Olympic Sailing regatta, Carlow’s Finn Lynch has delivered a strong open half performance at the Hyères World Cup Series event in France this week.

Although the first qualification event is not until August at the Sailing World Championships in Aarhus, Denmark, this week’s event is a strong indicator of form.

A 36th place in the first race of the day was his worst to date and was discarded, meaning he was forced to count an earlier 31st place, scored in Monday’s opening race.

But in Thursday’s second race, after two general recalls, Lynch won the start in the 68-strong line-up that included multiple Olympic medallists and past champions and delivered a solid fifth place result, his best in the series so far, to leave him 13th overall after six races.

Critically for both Ireland and Lynch’s hopes of a place at the Tokyo games, the National Yacht Club sailor was lying 11th by nation at the halfway point of the series and is inside the top 14 nations quota of places to be decided in Aarhus.

Continued good form this week might even open the prospect of a place in the medal race final at Hyères, though a top 20 overall place might well be good enough for now as well.

Meanwhile, on the domestic racing scene, healthy levels of interest in 2018’s major events are apparent as the summer season gets under way.

Both Howth YC’s Wave Regatta on the June bank holiday weekend and Royal Cork YC’s Volvo Cork Week in mid-July are already on track to break the 100-boat entry turnout.

For offshore racing, the Volvo Round Ireland race at the end of June might yet exceed the 2016 edition, which had 50 starters, with 49 boats already entered.

The uptick in interest flies in the face of varying reports of boat owners’ difficulties in either finding crew or getting regular crew to commit to a season-long campaign plan.

The problem isn’t unique to Ireland and a recent seminar in Britain highlighted similar issues affecting the sport there.

Research carried out by Rushall Marketing on behalf of British Marine, the trade association for the UK marine leisure sector, noted a downward trend in participation levels, falling numbers of young people in the 16-34-year-old cohort, falling numbers in the family cohort 35-54-year-olds, but growth in the 55-plus group.

In other words, sailing as a sport is ageing.

The report also highlights growth in surfing, kayaking, paddle-boarding and even canal-boating.

Almost a dozen factors were identified to explain the trends, many related to technology such as mobile platforms and how these aren’t being deployed by sailing bodies, many of which are too small to have effective promotional budgets.

However, the report also points out that “too much focus on the assets (boats or gadgets) rather than the outcome, ie the overall experience and magic of being afloat” is also a major factor.

Just how comparable the British and Irish sailing and boating markets are is a moot point; the lessons could just as easily apply on this side of the pond, arguably with higher stakes given the smaller size of the Irish market.