‘For me, it’s an education in people. You don’t get that from many sports’ 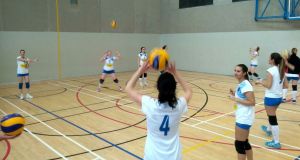 The Garda Volleyball Club women’s team at training in in the sports hall of Coláiste na hÍde in Tallaght.

It’s a Thursday evening and members of Garda Volleyball Club have congregated in the sports hall of Coláiste na hÍde in Tallaght for their weekly training session.

The men’s and women’s teams are here to train on this evening, all decked out in kneepads. A giant net curtain separates them while they train on opposite sides of the hall. For two hours, the players participate in a variety of drills and fling their bodies across the court as they thump balls over the net and heed their coaches’ orders. It’s gruelling, but fun.

The players on the court hail from all over the world. On this night, there are players from Poland, Mexico, Latvia, Lithuania, Spain, Ukraine, France, Romania and Czech Republic, to name but a few. The coach of the women’s team is Italian. The team wear a jersey bearing the logo of Mróz, a Polish supermarket with branches across Dublin.

You see, volleyball is something of an international affair in Ireland. While it may not be widely played by Irish people, the sport boasts huge participation levels among foreign nationals who have moved here. So much so that the vast majority of players in the national league are from abroad.

Take Anna Wojciechowska, Andreea Murgui, and Nathalie Condoure, for instance. The trio play on Garda Volleyball Club’s Division One team and come from Poland, Romania and France, respectively. When asked if many Irish people play on the team, they laugh and reply in unison. “One.”

Wojciechowska has been training with Garda Volleyball Club for five years. She joined the club in the hopes of meeting like-minded souls.

“The reason I started playing volleyball was mostly for my social life,” she explains. “I grew up in a kind of volleyball environment. I never trained that much before in Poland but when I came over here, I started training a lot and I started loving it. I met loads of people and started playing really well.”

She had avoided playing the sport in her native Poland for fear that she wasn’t tall enough, but found the sport to be less competitive and therefore more accessible in Ireland.

“It’s huge in Poland and the standard is much higher, so that’s why I was afraid to play because I don’t have the height,” she explains. “But here if you have the skill, that’s what matters.”

Both Condoure and Murguii played the sport in their home countries before moving to Ireland. Condoure started the sport when she was 18-years-old and sought out a club when she moved to Ireland. She has been a member of Garda Volleyball Club for the last four years.

Murguii, meanwhile, has been involved in the sport since she was a child and played at a high level in Romania. She gave up the sport when she moved to Ireland as she was more focused on completing her Leaving Cert.

“Then I decided, ‘No I want to get back to volleyball,’” she says. “That’s how I started in the last eight or nine months.”

Like Wojciechowska, she has noticed a different level and style of play in Ireland.

“Over there, you have to be the best if you want to play volleyball. You have to. If you’re not the best, the team goes down. Here, it’s not like that. I’m coming from a very stressful environment when I was playing. But here it’s just relaxing. It’s nice and friendly.”

One of the few Irish members of Garda Volleyball Club is Declan Ryan. Ryan started playing volleyball through work seven years ago. Nowadays, he plays, referees, and serves as secretary of the club.

Prior to getting involved, Ryan wasn’t aware of the sport’s global reach, but credits the sport with expanding his cultural horizons.

“I’ve met people from across the globe now at this stage,” he says. “Every corner. South America, Central America, North America, Australia, Middle East, Asia. For me, it’s an education in people. You don’t get that from many sports.”

People of all ages and from all walks of life play the sport. Among them? Au pairs.

“If it was an Irish person going abroad and they knew there was Gaelic football or some social sport that they played, they’d look for it,” explains Ryan.

“Au pairs are the same. They’re here for a certain period. I know from talking to them that they’re working and they don’t actually to get to meet a whole lot of people. And they do searches and they find volleyball.”

“Every Brazilian who lives in Ireland almost contacts you right away because they’re so used to having volleyball,” she says. “They want to play and it’s a great way to meet friends and to meet people who can speak their own language.”

Culliton attributes the high participation rates to both the sport’s “humongous popularity” all over the world and the comparatively lower standard in Ireland. The latter can make the sport a more enticing prospect to would-be players from abroad, she says.

“While at home, they probably wouldn’t continue playing because volleyball is at such a high level, they kind of get over themselves over here and realise you can just play volleyball for fun as opposed to professionally.”

In turn, Volleyball Ireland gets access to players and coaches of a higher calibre than might otherwise be here. Call it a cultural exchange.

“We had a coach who was very well regarded and Polish,” says Culliton. “He said, ‘I’d be willing to coach, but my English isn’t very good.’ We said, ‘Well that’s fine. You teach us volleyball and we’ll teach you English.’

Back in Coláiste na hÍde, Anna Wojciechowska emphasises the sense of community that exists within volleyball.

“Since I joined the club, I have met so many lovely people and I have so many friends through volleyball,” she says, noting that they regularly go for nights out together.

“Even in work, it’s different. I meet people but we don’t hang out together. But in volleyball, you can actually meet someone.”

Andreea Murgui agrees. “You spend much time together in training and in matches. It’s much like a family. It’s nice, you know.”

And with that they run back inside. Another training session awaits.