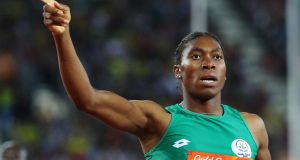 The chairman of UK Athletics has warned that there are “a lot of questions and challenges” with the IAAF’s controversial new testosterone rules.

He feels enormous sympathy for the South African 800m world and Olympic champion Caster Semenya, who will bear the brunt of them.

Richard Bowker also questioned whether the advantage that Semenya receives from high testosterone was really that different from the benefit a sprinter such as Usain Bolt derives from having a long stride length.

“I can understand why the IAAF wanted to look into the issue,” said Bowker. “I get that. But where we currently have got to has raised a lot of questions – and there are a lot of challenges with it as well.”

Under the new rules, women athletes with high testosterone will have to take medication from November onwards to compete internationally in events from 400m to a mile.

The International Association of Athletics Federations has said this will “preserve fair and meaningful competition in the female classification” because women athletes with high testosterone have an advantage of up to nine per cent over women with normal levels. However, Bowker appeared to question whether the ruling was necessary or fair.

“When you look at what it takes for an athlete to be a global champion it clearly takes a lot of guts, determination, talent and a physical prowess that sets them apart,” he said. “They are not like you and me. And the difficulty for me is where do you take the debate?

“If you are a high jumper and you are 6ft 8in and you are competing against someone who is 6ft 2in is that not an advantage? Or if you are sprinter and you have a much longer stride length, is that a physical advantage? I suspect that the decision that has been taken is not the end of the discussion.”

The UKA chairman also expressed his strong support for Semenya, who he said he fervently hoped would compete in the inaugural athletics World Cup between eight leading nations, including Britain, the US and South Africa, in London in July.

“There is absolutely no doubt that Caster is a phenomenal athlete who is a wonderful ambassador for the sport both in her home country and around the world,” he added. “And if she comes to London for the World Cup she will be assured of a fabulous reception by a very informed and loving crowd.”