Phil Healy in hurry to put Irish sprinting on the map

The future of Irish women’s sprinting may be exciting, but so is the present 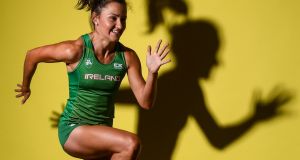 Phil Healy: the season is only getting going – the Irish senior championships in Santry on July 28th/29th is her next target photograph: David Fitzgerald/Sportsfile

The medals were great and the homecoming was too but Phil Healy isn’t giving them all the glory. With a gentle reminder of who exactly is Ireland’s fastest woman, Healy went to the Cork City Sports on Monday evening and ran 22.99 seconds for the 200 metres.

No Irish woman had ever run sub-23, and after the 11.28 she ran for the 100m last month, Healy is now the first Irish woman since 1978 to break national senior records in both events. The future of Irish women’s sprinting may be exciting but so is the here and now.

The headlines were also stolen over the last two weekends – including the World Under-20 silver medals won by the Irish women’s sprint relay team in Tampere, and the European Under-18 gold medal won by Rhasidat Adeleke over 200m in Gyor, Hungary, the previous weekend.

For Healy, the season is only getting going – the Irish senior championships in Santry on July 28th and 29th her next target, then the European Championships in Berlin in August, where she’s qualified in the 100m, 200m, 400m and with the 4x100m and 4x400m relay teams.

Thursday evening’s Morton Games also offers the chance to steal back some of the limelight: she’ll run the 400m only, then concentrate on the 100m/200m in Berlin, even if originally considering herself more of a 400m specialist.

Still the success of the younger Irish sprinters – winning two of the six underage championship medals over the past two weekends – is particularly pleasing for Healy, given she’s teamed up with them before in the relay, and will be again, starting with the London Diamond League meeting on Sunday.

“It’s really exciting for all of us,” says Healy, who at 23 is not too long out of the Under-20 ranks herself. “The younger girls have stood out, but I’m not surprised because they’ve gone through the ranks already, European Youths, World Juniors two years ago, to get that medal.

“There’s always room to improve, more squad days maybe, more relay camps, with everyone working together. It’s not possible for everyone to train together, but you can always work as a team, and bring that together to the major championships.

“My coach Shane McCormack has plenty of things that work, for our squad, and I think we’re sharing more of that, what works and what doesn’t, and learning from each other. It’s all about working together, building your own team as well.”

Two of the Under-20 medallists will run in London on Sunday; Gina Akpe-Moses and Ciara Neville, plus Patience Jumbo Gula from the Under-18 championships, along with Healy and her older sister Joan.

Growing up in Balineen in west Cork, it was Joan who first enticed her younger sister into the sport, and Healy is the first to admit her junior career wasn’t exactly stellar: “No, I definitely wasn’t running fast as a junior, all the way up never qualified or the All-Irelands until my sixth year in school.

“That transition to senior can be very hard, you see the stats, how few actually make it. For me, I only qualified for European Juniors, ended up fourth, in 2015, but never made the World Junior. But I think as well you do run out of natural talent at some point, and that’s where coaches need to work together, and look to what works and what doesn’t.”

Whatever Healy is doing now is clearly working: her 22.99 in Cork broke the previous Irish record of 23.03, which had stood to Sarah Reilly since 2001, and for years both sprint records belonged to Michelle Carroll, formerly Michelle Walsh, who in June 1978 ran an Irish senior 100m record of 11.43, which wasn’t broken until 2010, when Ailis McSweeney ran 11.40.

“When I ran the 11.28, it had been 11.40 for years, and I think this is getting everyone to raise their game,” says Healy. “And that’s spreading across the men as well, with Marcus Lawlor running his 20.40 on Monday night, and Aaron Sexton running another best in Tampere (21.03 for 200m – still only a schoolboy). I think we’re all pushing each other in ways.”