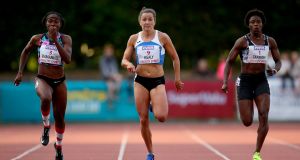 Phil Healy ran another brilliant Irish record at a high quality Cork City Sports at the CIT track when clocking 22.99 seconds for the 200 metres - the first Irish woman to crack that 23-second barrier.

It improved the previous Irish record of 23.02 which had stood to Sarah Reilly since 2001, and once again puts Healy in prime position in the Irish sprinting guard.

Victory went to Crystal Emmanuel of Canada in 22.76, the two-time Olympian, with the 24 year-old Healy chasing her hard all the way to the line to finish third.

“Amazing” said Healy, competing in her home county, “to break that 23-second barrier, and to do you on your home track, so just thrilled, especially as there was a bit of a headwind around the bend.”

Earlier Healy ran just short of her own Irish 100m record when clocking 11.30 seconds, just .02 shy of the record she ran in Santry last month.

“Thrilled with that too,” added Healy, “especially to back up the record run, being close to the record again is brilliant. And in front of the home crowd and many of the friends.”

Marcus Lawlor also produced the run of his career to date in the men’s 200m, the Carlow athlete running a new best to 20.40 seconds, now the second fastest Irishman of all time behind Paul Hession, a big improvement on his previous best of 20.71.

Earlier in the evening there was a homecoming of sorts for Sophie O’Sullivan in the colours of Ballymore-Cobh, running her first race since winning the silver medal over 800m at the European Under-18 championships in Gyor, Hungary - and delighting the home crowd with victory over 1,500m, including her mother Sonia, sitting in the stand.

After a tense battle with Stephanie Cotter from West Muskerry, O’Sullivan got herself in front over the last 200m and was determined to stay there, winning in 4:22.22, improving her previous best by five seconds, with Cotter also rewarded with a best of 4:22.52.