Virtual doping tests could provide glimpse of the future 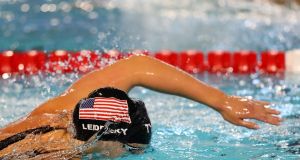 Katie Ledecky is one of the athletes signed up to the programme. Photo: Maddie Meyer/Getty Images

Anti-doping experts had already been kicking around ideas about testing athletes without having to bang on their front doors at dawn or dinnertime. Then the coronavirus outbreak grounded doping control officers - the people who show up with no advance notice to collect blood and urine samples from athletes to screen them for performance-enhancing drugs. Drug testing in sports essentially came to a standstill. Suddenly, those brainstorming sessions became a lot less theoretical.

Since no one knows when it will be safe to start testing athletes in person again, the United States Anti-Doping Agency (Usada) started an experiment two weeks ago, to see if sample collection could be done virtually. Instead of overseeing the process in person, the doping control officers are doing their jobs by phone and video conferencing.

The agency did not have to search hard for volunteer subjects, including athletes who are favoured to medal at the Olympics next year in Tokyo. Katie Ledecky, one of the world’s most dominant swimmers, signed on, as did runners Noah Lyles, Allyson Felix, Emma Coburn and Aliphine Tuliamuk. About a dozen others are participating, said Travis Tygart, the chief executive of Usada.

“We’ve been talking about this and laying the foundation for several months,” Tygart said. “Covid put that on fast forward and allowed us to roll it out.” Though the main short-term benefit would be minimising doubts about whether athletes are adhering to the rules in the absence of traditional sample collectors, the long-term goal of the virtual programme is more ease and less intrusiveness in drug testing.

Ledecky said that over the years, doping control officers have shown up at her college dormitory, in the middle of practices and at her apartment, where she was tested twice in early March as concerns about COovid-19 were growing. She said she wiped down every surface in her apartment after the officer left.

“I was happy to sign on for this,” Ledecky said of the virtual testing experiment. “I felt very comfortable.” At first glance, the programme would seem ripe with opportunities for cheating. Usada has tried to mitigate those, using both video conferencing and some straightforward scientific safeguards. Olympic-calibre athletes already have to comply with so-called whereabouts rules, which require them to provide one hour each day when they know exactly where they will be so a doping control officer can make a surprise visit. In virtual testing, instead of a knock on the door, athletes receive a phone call during that hour, and they must answer it.

The athlete is then sent a video link to start the sample collection. All the paperwork and sworn testimony are done on video. Then the athlete must retrieve one of the testing kits received when they enrolled in the pilot program. A doping control officer gets a virtual tour of the athlete’s bathroom and watches the athlete through the entire process, except when the athlete is providing the urine sample. After emerging from the bathroom, the athlete inserts a temperature strip into the urine to prove that the sample is fresh before sealing shut the container.

Providing a blood sample involves affixing a small plastic contraption with a red button roughly the size of a poker chip to the upper arm. Pressing the button produces a small pin prick and enough droplets of blood for a testable dried sample. The athlete then places the samples in a package, seals it on camera, and Usada sends an Express Mail representative to collect it.

Could athletes dodge proper testing by sending someone else’s urine? Or an old urine sample collected before performance-enhancing drugs were in their systems and then kept at the typical body temperature? Conceivably, yes. But Tygart said that the smell of the old urine would be horrific and that lab tests would show that it was old. Also, if it was someone else’s urine, certain characteristics wouldn’t match the blood sample.

Tygart acknowledged there are limits to the tests that can be performed on dried blood compared with the usual three test tubes of blood that are generally drawn. But, he said, that could change as the science evolves. “The accepted global gold standard is observed collection of blood and urine, out of competition, and that isn’t changing,” said Tygart, who said he had been in contact with his organisation’s counterparts in Germany and Norway about developing similar programmes for their athletes.

A spokesman for the World Anti-Doping Agency said the organisation was not aware of the programme. Lyles, an American sprinter, was among the first athletes to have a virtual test. He said it took roughly 90 minutes. He is 22, has been getting tested for five years, and the only difference this time, he said, was “having to do everything myself.”

On the whole, he said he preferred the usual testing method. “I personally like someone being there, because it makes you accountable,” said Lyles, who has been running on a soccer field at a park near his home in Florida because all the tracks are closed.

Tuliamuk, who won the Olympic Trials Marathon in February, said the virtual test was easy, but she questions whether it can ultimately be used in countries such as Kenya, where she was born. Internet service isn’t always readily available there, and athletes might not be as familiar with the technology.

“I’m super educated,” Tuliamuk said. “I’m not sure it will be as easy for others.” The long-term advantages of virtual testing may ultimately override any worries. If anti-doping agencies and international sports federations don’t have to fly agents all over the world to collect blood and urine samples from athletes, the savings would be significant and allow more athletes to be tested more often.

“I’ve competed against athletes who doped, and it’s had a huge impact on my career and the careers of my friends,” said Coburn, a world champion in the steeplechase. “Anything we can do to make testing more available is a worthwhile endeavour.” – New York Times