Nicolas Roche: ‘For me the Tour in August could be a very good thing’ 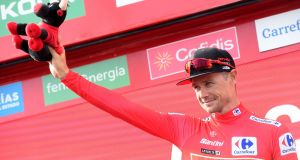 Nicolas Roche wearing the leader’s red jersey in Alicante during the 2019 Vuelta a España. Photograph: Jose Jordan/AFP via Getty Images

Nicolas Roche has welcomed the possibility that the Tour de France will be held in August, saying that it will be good for the sport if it does indeed go ahead this year, and that a revised date could personally suit him very well.

The sport of professional cycling is currently on hold due to the Covid-19 pandemic, but there have been suggestions that it could take place in August of this year.

“For me, the Tour is the Tour,” Roche told The Irish Times this week. “I am a big Tour de France fan, a fanatic. For me, I would love that the Tour would happen and I would love to be considered for it as well with this new [racing] programme.”

Roche has ridden the Tour nine times in the past, with a best finish of 12th in 2012. However, he has fared better in the later Vuelta a España, netting fifth and sixth in the race, winning two stages and wearing the leader’s red jersey in 2013 and again last year. He traditionally has better form later in the season, and so gives a thumbs up to thoughts of a delayed Tour.

“For me, having the Tour in August could actually be extremely good news,” he said. “Obviously the preparation is different [due to the current disruption to training and racing]. I am going to have to work really hard in July and see how things go with altitude training and all that. It doesn’t mean I am going to have the same form as in other years. But I just wish that the Tour is on. I sincerely hope that I can ride the Tour.

“I am just this kid who looks up to the Tour with big eyes and is dreaming of victories there. For me, my whole life and career was based around the Tour.”

What will be crucial in determining if the race takes places is if the Coronavirus plummets in France beforehand. The country has been very hard hit, with over 110,000 cases and more than 10,000 deaths. France is taking considerable steps to try to contain the virus and has greatly limited freedom of moment. Roche’s base of Monaco has followed suit, and so he has had to train indoors at home and also obey other rules, including a curfew between 10pm and 5am.

He has adapted by doing between 19 and 21 hours of exercise per week on his home trainer set-up, and showed strong form by taking third in the virtual Tour of Flanders race held last weekend.

However, he is concerned that other countries are not taking things as seriously. “For me, the biggest concern I have about the Tour possibly going ahead is what is happening elsewhere. Maybe at some point France is potentially ready, but how are we going to manage foreigners? As of today, the borders are closed. France has had really, really strict rules and very, very strict protocols. But would you let in a country that hadn’t had that?

“If I was France, I wouldn’t let in any of the countries that didn’t go through a similar protocol. I would let in a few Spaniards and a few Italians if they come down with their [virus] numbers, but that is about it. I said that in an interview in L’Equipe . . . for me the biggest problem if I was the French government is that it is not France, it is the foreigners attending the race. And that also includes athletes.”

Roche doesn’t name the other countries he is concerned about, but several have been slow in their response to try to fight the virus. It means that even if the trend goes in the right direction in France, there is a danger of importing new cases during the Tour.

1 Connell losing touch with the club championship is the real tragedy of Normal People
2 Ghosts and goalposts: The soul of street football in Dublin’s Gloucester Diamond
3 Shane Ryan: Shark attacks and gruelling shifts on a Covid-free Atlantic mission
4 Rugby clubs in crisis: ‘I fear a lot of players won’t go back playing at all’
5 Michael Walker: Fans wish to be supporters, not spectators. There’s a difference.
Real news has value SUBSCRIBE