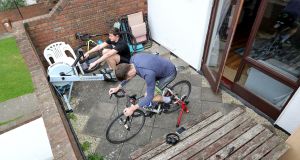 Keeping fit during coronavirus restrictions is no easy task. Even when gyms and swimming pools closed shortly after all sport was suspended there was still the great outdoors in which to walk, run, cycle or kick a football. When that was reduced to within 2km of your house things got even more difficult. But there are still ways to stay on track.

Around 10 per cent of the population of the Republic of Ireland are members of a fitness club of some sort. That accounts for about 480,000 people and an industry worth €300 million annually in Ireland.

While that figure of 10 per cent of the population is lower than a lot of European countries – for instance in Sweden it’s 22 per cent – the average monthly price of gym membership in Ireland is €49 compared to the European average of €39.90.

Now, with gyms all around the country closed, people are looking for alternative ways to stay fit. The increase in the numbers of people out walking, jogging and cycling has been clear to see, particularly before the current stricter measures were introduced, but lots of people are also bringing the gym into their homes with sales of weights and exercise bikes in particular rising dramatically.

Online workouts have become a key part of the day for many with personal trainers enjoying a boom on YouTube and Instagram. Joe Wicks, whose YouTube channel, The Body Coach TV, has 2.13 million subscribers, is pulling in viewing figures of almost 2 million on his daily workout videos.

The coronavirus pandemic has had a negative impact on the majority of industries but some have felt a boost the other way. Home fitness is certainly one of those and Fitness Equipment Ireland, owned by Colm Cleary, have seen the benefits.

Cleary set up the business seven years ago in his house and now has six premises as well as a showroom in Jamestown Business Park. Before non-essential retail outlets closed, Cleary says up to 100 people were queuing outside the showroom looking to buy equipment for the period during which the gyms will be closed.

Since then all business has come through online and phone orders and the figures tell their own story. In the run-up to Christmas, the company had revenues of about €50,000 in online sales for the month of November which was up on the monthly average for the year.

In the month just gone they pulled in just over €450,000 in online sales, an 800 per cent increase on that month of November last year.

“We’ve never had the likes of it before,” says Cleary. “It’s pretty much 10 times our normal revenues for online sales. It’s been a crazy little while. In the shop it was similar but obviously the shop is closed now. We’re just taking online orders and orders over the phone now with all the guys working from home. The couriers are all basically working and we are getting one or two warehouse staff coming in to dispatch orders.

“This is all across the world with the fitness industry, not just in Ireland or the UK but in Europe and America as well, everywhere has experienced this massive demand the exact same as we have in Ireland. I’ve had friends contacting me from the States looking for kettlebells. We’d know all of the suppliers in Europe and they’re telling me they’re having the same demand. As soon as the gyms closed I said there’d be a big surge here but I didn’t expect it to the volume that it’s happened.”

As with many things the equipment Cleary sells is manufactured in China where the coronavirus outbreak originated and where strict lockdown measures have been in place since January. This has led to delays in equipment being shipped and the results are clear to see when you go onto a website of any gym equipment seller at the moment where “out of stock” labels are very frequent.

“The factories in China are all back working now but they were off for at least four to five weeks, if not more,” he says. “There are big delays but we had orders in so we have stock leaving factories in China pretty much now and we had a couple of containers arrive last week that were ordered three or four months ago really before this thing kicked off altogether.”

And while it’s not all good news – Fitness Equipment Ireland has lost 50 per cent of its customer base as a result of gyms closing – the huge rise in online sales will hopefully, Cleary says, create a new customer base even long after the virus has passed and people perhaps decide to stick with exercising at home.

Finding new customers is one positive of the current situation for many areas of the health and fitness industry and cycling is also one of those. Bicycle shops are now closed but repair businesses are still operating on an emergency callout basis after being deemed an essential service when the latest restrictions came into force.

For Conor McAlinden, general manager of Cycle Superstore in Tallaght, the period before they had to close their premises saw a rise in enquiries and sales, particularly for indoor trainers and from families looking to cycle together. However, since then the service has changed and he says their main focus now is doing their bit to help essential workers who need their bikes to get to work.

“We have two vans on the road now nearly all the time,” McAlinden says. “Our main focus now is emergency repairs for medical staff but we’ll also do it for anybody who needs it.

“An example would be yesterday when a guy who drives an ambulance contacted us for a repair. So that was the first priority, we got his bike sorted and delivered back to him. The way we operate is we go, collect it, bring it back to the store to make sure it’s 100 per cent and then drop it back to the person as well. That’s really the most important part on our end is to get those people, the people in the medical service, back on the road.

“At this stage, with the lockdown, we’re just getting by. We’re just trying to keep it going and do our bit for the community. The key message is just for the priority of emergency repairs.

“I had another person who said they’d normally get the bus to work and they can walk but they didn’t want to at night with the quiet streets so they were looking for a bike because that gave them confidence that at least they were moving at pace.”

The reduced bus services around Dublin have also led to more enquiries, particularly in the form of e-bikes which people are looking to buy for longer commutes. E-bikes have a battery-powered motor in them to assist with pedalling, making them much easier to use for longer commutes than a regular bike.

“Even in the lead-up to this we would have been way up in terms of enquiries on e-bikes compared to this time last year,” says McAlinden. “E-bikes are really taking off now. It’s a really practical way of commuting to work. I had a call just today from a woman who lives out in Dublin 18 but works in the city centre so she felt the e-bike would be the solution for her to get in and out to work because she used to rely on the bus.”

The company does expect a “dramatic decrease” in April but McAlinden is hopeful that the current situation will attract more people to cycling as both a form of exercise and a way to commute, particularly in the city.

With coronavirus restrictions having a positive impact on climate change all around the world, perhaps one of the more positive long term effects will be more people opting to cycle rather than drive.