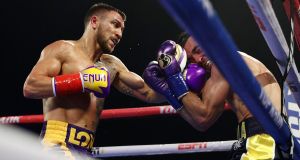 Vasyl Lomachenko has retained his WBA and WBO lightweight titles with a fourth-round stoppage against Britain’s Anthony Crolla in Los Angeles.

The two-time Olympic champion was the overwhelming favourite heading into the bout at the Staples Center on Friday night and dominated from the off, throwing a flurry of punches and backing Crolla into the corners.

Referee Jack Reiss gave a standing eight count at the end of the third round as the Briton was being held up against the ropes amid a barrage of punches, but the fight continued.

A minute into the next round it was all over, Crolla going down just a minute in after a hard right hook from Lomachenko.

Crolla, a former world champion from Manchester, had aimed to pull off one of the biggest shocks in boxing history after a win over Daud Yordan last November made him the mandatory challenger for Lomachenko.

He first took world honours in 2015 when he wrenched the WBA lightweight crown from Darleys Perez, before successfully defending the belt against Ismael Barroso.

He came up short in a pair of bouts against the highly-regarded Jorge Linares over the next two years, but rebuilt with three successive victories.

Ukrainian Lomachenko headlined the Staples Center, which saw a crowd of more than 10,000, for the first time in his career, and has now won 12 straight fights.

“After he was counted out he got up and was fine. But he’s devastated. He said: ‘I’m just so gutted for the team because of the work they did’. I’m like: ‘Don’t worry about the team, you just fought pound for pound number one’.

“Everybody said to him — (promoter) Bob Arum, every fighter at ringside — ‘There’s no disgrace in that, mate’.

“You’re mandatory challenger, what else are you going to do? You get a shot at Lomachenko, you’ve got to take it. But he was just too good.

“Unfortunately in the fourth round Crolla knew he had to do something and go for it. When you do that against Lomachenko, you leave yourself wide open with gaps. Lomachenko was too good for Anthony.

“This shot came against the head, you can’t not take this opportunity. Losing to Lomachenko is never a disgrace.

“He can have zero regrets because he prepared the best he could, it’s just about levels. Who is going to beat Lomachenko?”

Lomachenko, a two-time Olympic champion, justified his overwhelming favourite status with a clinical 13th win of his professional career.