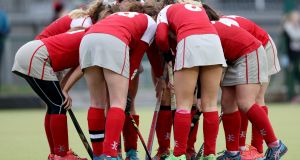 A view of the Pegasus team huddle. Photo: Oisin Keniry/Inpho

Pegasus sealed the Hockey League title in some style on Saturday with their eighth successive and biggest win of the campaign, their 6-0 defeat of Muckross in Belfast giving them their first national title in four years.

Since losing to UCD in early February – one of only two Hockey League games they failed to win all season, a home defeat by Loreto back in November the other – the Greg Thompson-coached side took full advantage of six of their next eight games being on home turf, scoring 29 goals and conceding just four during their winning streak.

Muckross, in desperate need of points to avoid automatic relegation, put up a gutsy battle to keep the champions-elect scoreless for the first 29 minutes, but once Steph Thompson turned home the rebound from a penalty corner to give the home side the half-time lead, the goals flowed.

Alex Speers and Lucy McKee had Pegasus 3-0 up by the end of the third quarter, with Caitlyn Harvey, McKee again and Claire McKane completing the romp in the final period.

Loreto, who drew 1-1 with Pembroke Wanderers, and last season’s Hockey League winners UCD will join Pegasus in the Champions Trophy, the students clinching their place in the tournament with a 3-2 win away to Cork Harlequins on Saturday.

That fourth qualifying spot is now there for Pembroke’s taking – they are two points behind Harlequins but have a game in hand. They play Railway Union next Thursday before completing their campaign against Old Alexandra on April 27th, the same day Harlequins play their final game at home to second-from-bottom Ards.

Ards are still a point clear of Muckross but the Dublin side have two games to play, both against UCD. Their away fixture against the students last Thursday was abandoned thanks to torrential rain.

In division two of the Hockey League, Catholic Institute finished top of pool B, ahead of Monkstown, after a 2-0 win away to Dungannon. The Limerick side will, therefore, play Trinity in the semi-finals of the promotion play-offs, with Monkstown facing pool A winners Queens. The winners of the play-offs will be promoted to the top tier of the Hockey League, with the runners-up facing Ards or Muckross in a relegation/promotion play-off.