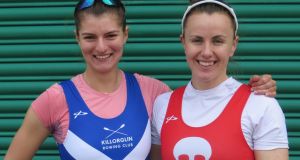 The Ireland pair of Monika Dukarska and Aifric Keogh, who compete for Ireland in Italy this weekend. Photograph: Liam Gorman

One of the joys of the recent trial at the National Rowing Centre was the chutzpah of the junior men’s coxed four. Leah O’Regan roared on her crew of Matt Gallagher, James O’Donovan, Jack Dorney and John Kearney in brilliant battles with a prospective Ireland under-23 unit. The crew, which went on to be pre-selected for the World Junior Championships in Tokyo, faces into more battles this Sunday at the Lough Rynn Regatta.

Even as the Ireland senior squad see their first action of the season in Piediluco in Italy, the Grand League series lifts off at the Leitrim venue, and again boasts the virtue of pitting talented under age competitors against adult rowers. On the women’s side Grace Healy, Sadhbh Scully and Lucy McCoy test themselves against more experienced opponents.

The eight lanes should be a big plus, with the prospect of the day closing with 14 crews contesting A and B finals of the men’s Division One eights. At the senior end what looks a full-strength UCD crew take on Irish champions Commercial.

The UCD eight hove up to the Irish University Championships on Saturday at the same venue hoping to gain revenge on Trinity who pipped them in this race last year. NUIG emerged as overall champions – and they took the women’s senior eights and the Bank of Ireland Trophy. Trinity and UCD will be in the hunt this year.

The Irish Schools’ Regatta – filled from the ranks of ever-improving junior rowers – runs alongside the university event.

Three of the top Ireland senior crews taste action on Saturday at the two-day Memorial Paolo d’Aloja in Italy.

The double of Phil Doyle and Ronan Byrne, the pair of Aifric Keogh and Monika Dukarska, and Sanita Puspure in the single scull get to test themselves in the company of over 30 other countries right at the start of an Ireland training camp.

Aileen Crowley and Emily Hegarty and Claire Feerick and Eimear Lambe could yet form an Ireland four. They are entered in pairs on the first day.

Gary O’Donovan and Denise Walsh, both troubled by injury recently, are set to join the camp next week.

The camp for sweep rowers at the National Rowing Centre will start on Wednesday (April 17th) and run until April 28th. It could have 10 men rowing, including Shane Haugh and Mark Doyle, two big men back from Australia.

Powerhouse Sports, an Irish company, has signed up to provide technical clothing for Ireland teams. Eugene Coakley, who is based in London, was the link on the deal.

London proved a good base for Irish crews on Sunday, a men’s masters composite winning the D grade (average age 50 or more) at the Vesta Veterans’ Head.

Rowing Ireland will launch a Corporate Regatta series with an event in Dublin on May 10th.

Cracknell has been a story of the week. His estranged wife Beverley has told her story: she was married to a man in his 40s who would put rowing in a college race ahead of family duties. Cracknell himself, in an interview on BBC Radio 5 Live, praised her, and how she supported him when he almost died. He spoke of how brain injury makes one “more oneself”. Could Cracknell, now pared back, gain traction without the drive to win things?