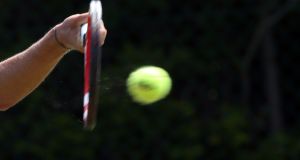 Dave Miley has received the Tennis Ireland nomination in his bid to become the ITF president. Photograph: Donall Farmer/Inpho

In an obvious thawing of their relationship Dave Miley has received the support of Tennis Ireland in his bid to become the president of the International Tennis Federation.

Late last year the former Irish national tennis champion announced his intention to run in the ITF presidential elections scheduled for September of this year.

Miley, who stepped down from his role as director of development at the International Tennis Federation towards the end of 2017 also ran for the position of Tennis Ireland chief executive following the retirement of Des Allen in 2016.

Richard Fahy, who previously worked in the Football Association of Ireland, was subsequently appointed as CEO.

Unhappy with the interview process Miley took a complaint against Tennis Ireland, which was upheld by the Workplace Relations Commission (WRC) in July 2017. The WRC subsequently ruled the tennis governing body was guilty of age discrimination, contrary to employment equality law, with Miley awarded damages of €6,500.

On Thursday Tennis Ireland released a statement saying that Miley met with Tennis Ireland officials in February of this year and made a presentation to the Board.

Miley’s contention, when he was a candidate for the CEO position, was that the selection process carried out by board members of Tennis Ireland was flawed and that insufficient weight was given to his 24 years of experience in the sport. He added that the process had lacked transparency.

“Mr Miley accepted the invitation and his presentation was well received. Following the publication by the ITF, on the 7th March, of the Rules that will apply to the elections, the board of the company convened a committee to consider and review the request,” added the Tennis Ireland statement.

“The committee reported back to the board at its meeting on Saturday March 23rd last. The board agreed with the decision of the committee and Mr Miley was informed of the board decision to agree to his request to formally nominate him prior to the May 27 deadline. The board wishes Mr Miley well in his endeavours.”

Miley is challenging the incumbent International Tennis Federation president, David Haggerty and is believed to have received pledges of support from a number of tennis associations in Europe and Asia, where he has been working as a consultant.