US Open: Serena Williams on course to claim singles record 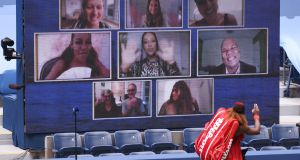 Serena Williams waves to the Jumbotron as she walks off court after winning her quarter-final match against Tsvetana Pironkova at the US Open. Photograph: Al Bello/Getty Images

It was not quite the mother of all battles of the mothers, but Serena Williams was plainly relieved to put behind her a fretful three-set win against the grasscourt specialist Tsvetana Pironkova to reach the semi-finals on Thursday night.

Naomi Osaka, who plays Jennifer Brady on Thursday on the other side of the draw for a place in Saturday’s final, will be favourite to win the US Open for a second time but Williams, who suffered again to beat the unseeded Bulgarian 4-6, 6-3, 6-2, in 2hr 12min, is not quite out of the reckoning yet.

Along with Victoria Azarenka, her semi-final opponent, the 38-year-old Williams and 32-year-old Pironkova were the last standing of the nine mothers who started the tournament and the American, a six-time US champion, was comforted to have Alexis Olympia courtside, just a week after her third birthday.

Waving to her daughter, Williams said courtside: “It just shows how tough moms are. If you can birth a baby, you can do anything. She was incredible today. You play a match and go home and you’re still changing diapers. It’s like a double life, surreal.”

The intimidation has waned noticeably. Her greatness now comes not in dominance but desperation, of which there was plenty in this quarter-final. Pironkova had taken just two sets off her in their four previous meetings but was unnervingly cool under pressure.

They started 22 minutes after the advertised local time of midday thanks to another dawdle to the battlefield by Williams, who kept her opponent waiting in the corridor for a quarter of an hour. Not good.

Once they got going, Williams got serious – as did Pironkova, left thigh heavily strapped but smoothly into her trademark flat backhand down the line to break after 17 minutes. A solid hold stretched her lead to 4-2.

Williams gulped in a big load of oxygen at the start of the seventh game and, with her forehand spluttering, held to love. Pironkova grabbed two set points on her serve and sealed it with an angled forehand after 40 minutes. The exchanges were still close enough to suggest there was plenty of tennis left in the contest, but Williams was profligate and frustrated.

She came from a set down in the third round against Sloane Stephens, but her fellow American was curiously out of sorts. This time, Williams received no such luxury from an opponent using making the most of her big moment. Williams helped her in the first set with 11 unforced errors.

Pironkova broke again at the start of the second and Williams needed to draw on their shared past for inspiration. In two of their previous meetings, she had come from a set down to impose herself and, after waiting 50 minutes for her first break point, she scrambled back to parity. Her forehand was still malfunctioning, as she hit wide and long on key points, and the upset was still part of the equation – a Pironkova specialty.

Williams hit her 50th ace of the tournament – more than anyone in the draw – to dig herself out of trouble in the third game of the second set, and another to steady her nerves. But, having fashioned a break point in the fourth game, she again overcooked it from the back of the court with Pironkova stretched. A love hold lifted Williams’s spirits. Pironkova is a very good player, but not a great one; Williams is so obviously a great player, but too often lately capable of some inexplicable dips. It made the match close, uneven and compelling.

Williams gathered her composure to break for 5-3 after a 27-shot rally, the longest of the match, that left them both with hands on knees. When she levelled at a set apiece with her 16th ace, her scream was surely audible outside the Arthur Ashe Stadium.

There was marginally more authority in her finish, as she held on to an early break in the third set, but it was not her most convincing performance. Even 4-2 up, she was relying on Plinkova’s mistakes for many of her points, and was breathing heavily after only two hours on court.

But she is proud, stubborn, a fighter – always has been. She broke again through two deuce points, with a classic crosscourt backhand winner, and wrapped up the match with a 20th ace and a barrage of unreturnable serves, dominant at last.

When Williams was 17, three times she came back from a set down – against Kim Clijsters, Conchita Martínez and Monica Seles – before beating the world No1, Martina Hingis, in the final. She never had such a challenge here again – until 21 years after her first triumph. She came back against Stephens, and she did so against Pironkova. How much she has left not even she knows. – Guardian