‘She’s done nothing wrong at all. I ask you to stay especially supportive and caring to her’ 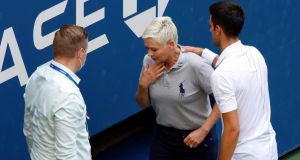 Novak Djokovic was disqualified from the US Open for hitting a ball at a line judge. Photograph: EPA

Novak Djokovic has asked his fans not to abuse the line judge at the centre of his US Open disqualification.

The world number one was thrown out of the New York tournament on Sunday night after he accidentally hit lineswoman Laura Clark with a ball after striking it out of annoyance.

Clark was stood at the back of the court and was struck in the throat as Djokovic showed his frustration during his fourth-round match with Pablo Carreno Busta.

She is reportedly bruised and was heard gasping for air after the incident, but has been targeted by Djokovic’s angry fans online who accused her of exaggerating her reaction.

Djokovic tweeted: “Dear #NoleFam thank you for your positive messages.. Please also remember the linesperson that was hit by the ball last night needs our community’s support too.

“She’s done nothing wrong at all. I ask you to stay especially supportive and caring to her during this time.

“From these moments, we grow stronger and we rise above. Sharing love with everyone. Europe here I come.”

Clark was not at the Flushing Meadows site on Monday. A US Open spokesman said on Monday of the line judge’s condition: “The line umpire who was struck by the ball is resting comfortably in the hotel today and is under the observation of the tournament doctor and will return to work when she and the doctor feel it is appropriate.”

In addition to forfeiting his entire prize money of $250,000, Djokovic has also been fined an additional $10,000 for not attending a mandatory press conference.

Instead, the Serbian quickly left the tournament grounds and posted a carefully crafted apology on Instagram.

He said: “This whole situation has left me really sad and empty. I checked on the lines person and the tournament told me that thank God she is feeling OK.

“I’m extremely sorry to have caused her such stress. So unintended. So wrong.

“As for the disqualification, I need to go back within and work on my disappointment and turn this all into a lesson for my growth and evolution as a player and human being.

“I apologise to the US Open tournament and everyone associated for my behaviour. I’m very grateful to my team and family for being my rock support, and my fans for always being there with me. Thank you and I’m so sorry.”

1 Gordon D’Arcy: the next fear for Irish rugby is England in Twickenham
2 Seán Moran: Fallout from Tyrone final celebrations will concern GAA
3 Pro14 teams need private planes to keep show on the road
4 Born to ride, born to win: Sam Bennett, the making of a green machine
5 How Dundalk’s opponents Sheriff started on wrong side of the law
Real news has value SUBSCRIBE